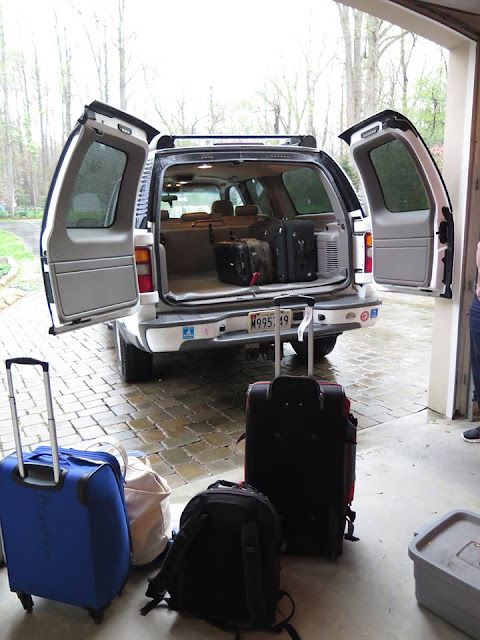 Yesterday I was upstairs blogging peacefully for the first time in some days while hubby and house guest (in his early 80's) are in the basement doing prep work for a big trip.

Hubby: "We have to keep all the lithium batteries in our carry-ons.  I bought some cheap towels to wrap the big C-clamps and wrenches together."

Guest and fellow traveler:  "No, you bought some large washcloths!"

Hubby:  "Nope, we are getting there.  Just trying to balance the 50 pounds between the two suitcases. At least we are not over 100 pounds."  (They later learn they have $70.00 overage in weight.)  There are valid reasons for this weight problem and it could not be helped, unfortunately.

Someone from the basement..."I don't want you to do this now.  DON'T do it!"  Followed by grunting and shuffling sounds and someone dragging something upstairs.

...They finally left early this morning and I am exhausted as the scenario above is just a small portion of what has been going on the last three days.  Last week hubby learned a number of items (heavy tools) had been stolen from the locked container overseas and he had to rush out and buy them.  To my own credit I had warned him years ago when this plan was in its infancy stages that theft was going to be an issue on this South Pacific isle if he insisted on trying to do this project.

Our guest, who will be keeping him company, has traveled much and accomplished much and wishes to share much of his over 8 decades of life as he follows me from room to room during the three days he stayed with us making the bathroom the last resort for my peace of mind.  At least he was a good eater and ate everything I put in front of him!

Well they are off.  I now will try hard not to worry about hubby diving in the open ocean trying to set up hardware!  I will peruse the lengthy list of stuff he wants done while he is gone.  (Note to husbands:  Go on a long trip and list all the things that you do for your wife and home which she has to now do, and she will certainly appreciate you when you are home!)

Today is rainy and other than a quick spreading of lawn seed from the tiny bag left in the garage and going to purchase another large bag of lawn seed this morning, I will most likely take the rest of the day off and just be a slug.  The beauty of not moving, not thinking, not doing chores, not straightening up (the luxury of living like The Donald.)

A last minute hint that the 80-something might also be diving did concern me.  I will not tell his wife as she currently is nursing her son from a heart attack and installation of a pacemaker as well as healing from a fall herself and needs no more stress in her life.  She also will be getting a houseguest on Monday, hoping so much this mean help for her and not more work.