There seem to be two philosophies of how we approach the lives of others in this world and how that applies to our resources.

There is a group of people that do not see wealth they have made or inherited or found as something that is due to them wholly because of their efforts or the result of having good genes.  God may have provided this wealth as an opportunity to lead change for the better.  It is a power that they can use to help those who need help because others lives did not go so well.  If they do not believe in a God then they look at this wealth as a responsibility and opportunity to do something good in the world in addition to creating more wealth.  These people see themselves as part of a huge tapestry of humanity.  They may see themselves as a leader, but also as a part of the whole of mankind.  Humanity that is good, bad, or indifferent.  They want to help weave this tapestry into a better pattern and see their wealth and power as a tool in that direction.  They look for problems to solve outside their daily professions or sometimes within their professions.  Wealth is, of course, a hugely indefinable thing.  Someone who earns $30,000 in his first job may think that driving for Meals on Wheels and paying for the gas and car maintenance out of his tight budget the least of a contribution he can make to those who do not have an income or cannot get out to get food.  A man like Tom Steyer who is a hedge fund manager worth 1.6 billion sees his opportunity in funding (hugely) environmental programs to keep people on the planet healthy while fighting the corporate energy companies that do not care about climate change, even though the CEO's believe it is happening.

The second group of people are those that see their wealth as their right.  It is due to them because they were born into a family of amazing hard-working and smart people.  OR they got their wealth because they knew how to work the system to their benefit.  They were SMART.  They do not think there is such a moral measure as a "fair" deal.  You win or you lose and that is your opportunity or your failure. They are part of the good gene pool and they think those in the poor gene pool cannot really be helped.  It is a Darwinian view that most are poor because they are stupid, lazy or weak.  The losers are drug addicts, criminals, or not able to adapt to our changing world fast enough.  This second group put their money into more growth or put it away in offshore banks where the socialist governments cannot "tax them to death."  They can be the man who makes $30,000 in his new job and spends a portion of that hard-earned money on a few guns to keep him safe from the "others" that do not fit into his gene pool such as that loser neighbor next door who is some weird religion and untrustworthy by his odd behavior.  They can also be the billionaire who runs for office and is not interested in being part of any group...Republican or European allied network or ANYTHING.  The billionaire who owes his power only to himself and never sees himself other than a leader of others.  He is smart enough to decide who wins and who loses and it sure as hell is not going to be him on the losing side.

Then, of course, there are a bunch of folks in between walking the tight rope trying to balance being good with being safe and with being financially secure and with keeping someone from killing them for disagreeing with them.  At least that is my take on it right now.  Maybe I am oversimplifying.
Posted by Tabor on Sunday, May 28, 2017 19 comments:


Last weekend among a few Mother's Day things that I did, I visited several embassies with my son and daughter-in-law. It was the European Union Embassies Open House.

This year they celebrated the 70th anniversary of the Marshall Plan, which was crucial to rebuilding Europe after WWII. They are clearly "grateful to the United States for our unwavering support of European peace, unity and prosperity". And they are celebrating the 60th birthday of the EU, which all began with the Treaty of Rome!  Twenty-seven embassies participated, including Britain, which was a bit of a surprise.  The event was from 10:00 AM until 4:00 PM, so we were able to hit only a few of the countries.

There were food bites, cultural singing and dancing, and fun costumes.  Many of the embassies had experts more than happy to talk about their areas of expertise. 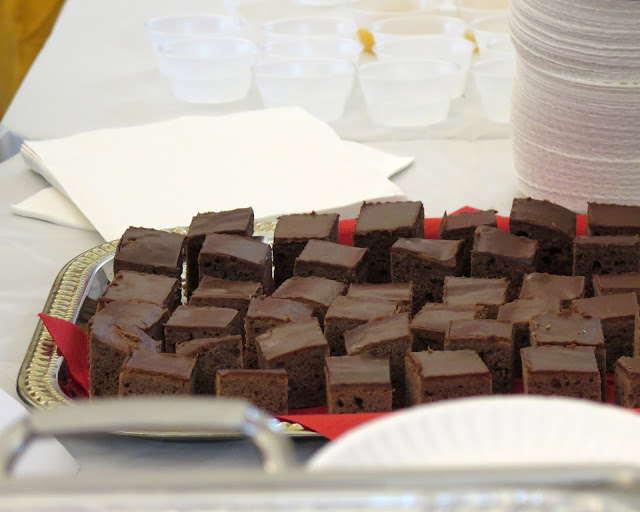 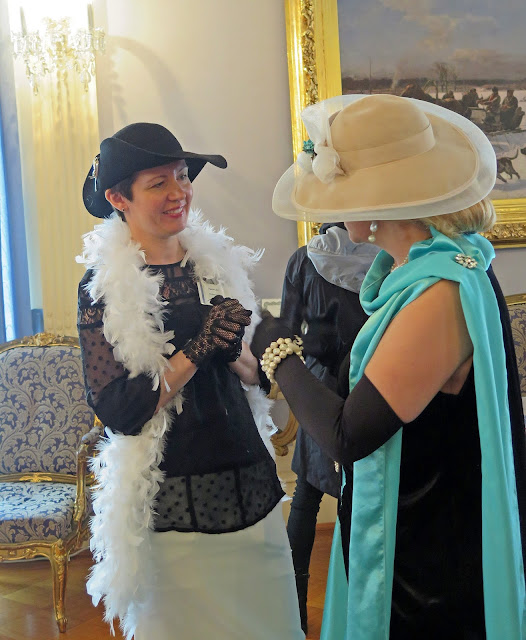 I learned from one handsome man in Uniform at the Italian Embassy all about the Carabinieri in Italy and its extensive global mission. 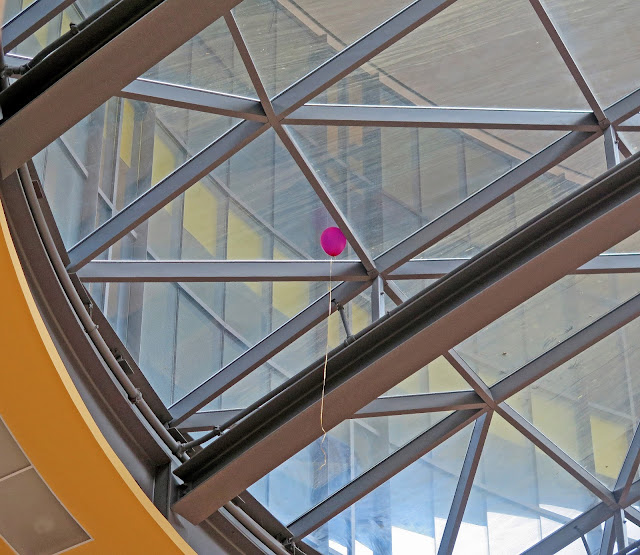 The Italian Embassy was quite modern indoors.

Those Embassies that were actually open did have security, which went smoothly and with a smile. 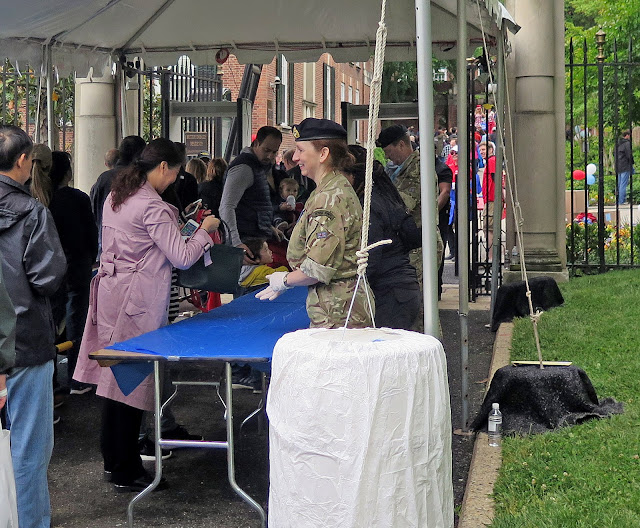 I was able to see where the large wet umbrella goes in a $440,000 Roll-Royce at the British Embassy.  I asked the tall handsome man if he came with the car and he smiled and said "That could be arranged." 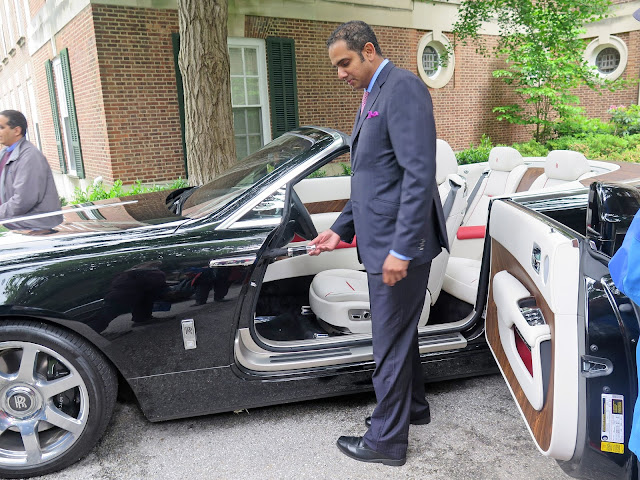 The Brits put out a Downton Abbey style table and some tall beauties. 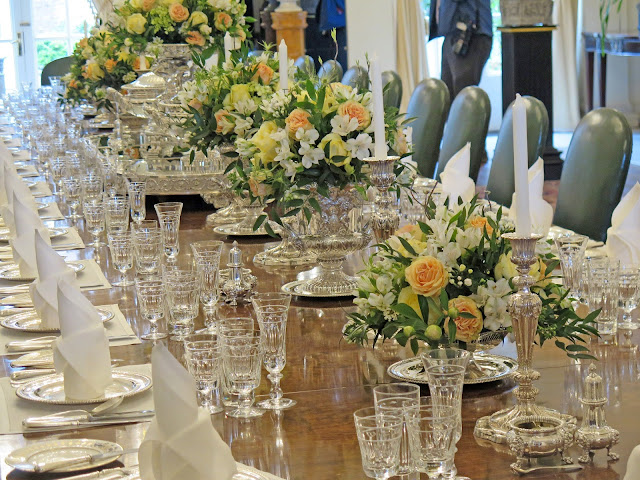 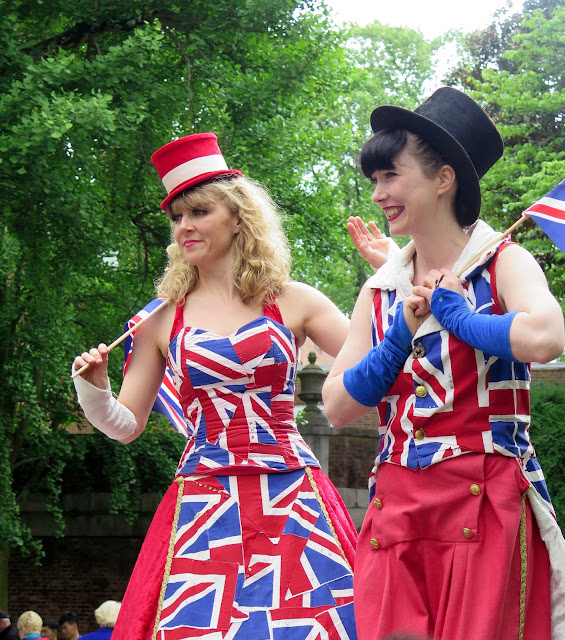 I saw wonderful costumes of historic figures such as Pola Negri at the Polish Embassy and soldiers at the Latvian Embassy. 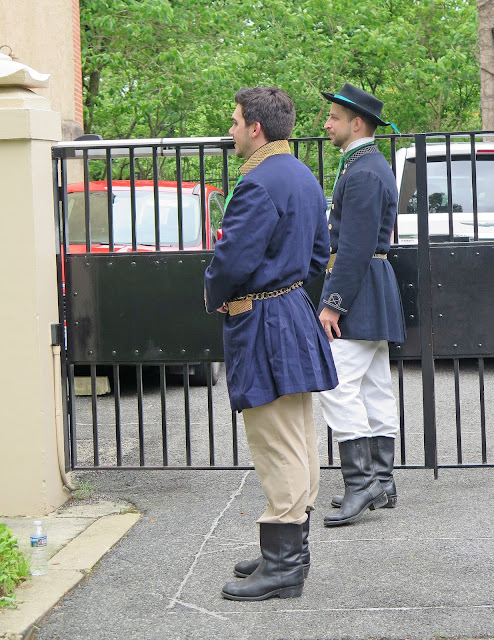 At the Latvian Embassy they were handing out all sorts of informational materials and when I asked if they had a list of their authors who had been translated into English the woman disappeared back into the Embassy and brought me a book of short stories, a book of poetry and the Ambassador to discuss literature!  Unfortunately, I was too polite to ask for a photo. 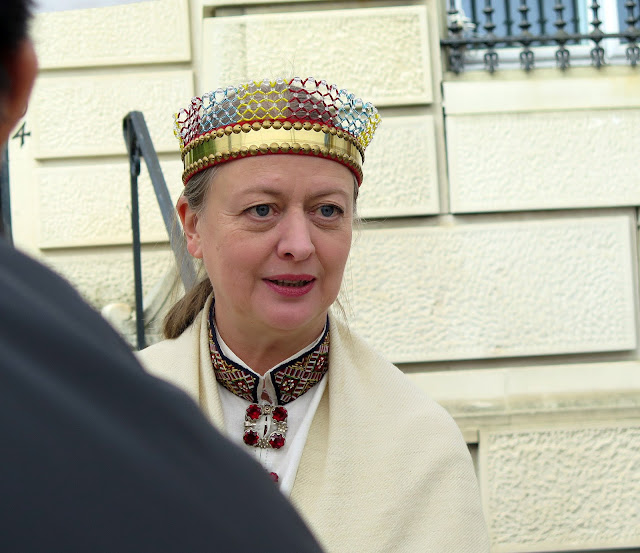 A day well spent, I would say despite the cold and damp weather.  A very important union and only those who know their history can understand its importance.  Now I want to visit Latvia!!
Posted by Tabor on Thursday, May 18, 2017 18 comments:

For those who are having trouble keeping up and who read through my questions I  now  provide you some answers:

Questions, I have questions.. 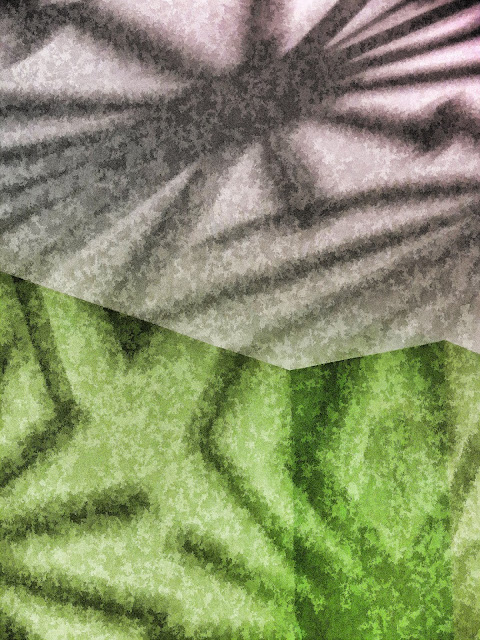 Why is profanity called "adult" language when it is clearly used when there are more adult words available to those with adult vocabularies?

Is it only in America that we have the "avocado hand epidemic"? and if so, why?

Why are Americans worried about North Korea attacking our Northwest coast when Hanford, Washington is dealing with 56 million gallons of radioactive waste in underground, leaking tanks and collapsing tunnels?

What does it tell us about our culture that Amazon sells $10 handbags and $10,000 handbags?

Do you ever get to a time in your life when you think that you actually 'get it"?

Do you think the marriage of that couple that wed on Mt. Everest will last?

How annoying is it that I am asking all these questions and do you think this is what is causing my insomnia?

More About Being "In or On" Time

I may have mentioned that on my good days I read a few pages of Marcus Aurelius book titled "Meditations" before I take a nap - not to disparage this classic but saying it puts me to sleep.   It is a challenging read since the language has the cadence and vocabulary of a Roman Emperor in the mid- 100's A.D.   That was certainly a time that was filled with intrigue and powerful people.  Time that moved very differently than time today.

I went to Wikipedia and this is what they wrote about his book:  "Aurelius' Meditations, written in Greek while on campaign between 170 and 180, is still revered as a literary monument to a philosophy of service and duty, describing how to find and preserve equanimity, a state of psychological stability and composure, in the midst of conflict by following nature as a source of guidance and inspiration."

Certainly fits these times, does it not?  So what did this philosopher/ruler have to say about time?  "Every instant of time is a pinprick of eternity"

I think that I like that it reminds me how I have so little significance on this planet that my worries would not even fill the tummy of a mosquito.    Some cultures move in monochromatic time and others in polychromatic time. Is that why we do not always get along with each other?  You arrive too early for dinner and I arrive too late and no one arrives on time!  We cannot agree on the correct time.

Have I moved us closer to an understanding?  Now does that make you feel better?

Time is a Moving Thing


Time has been a very relative thing for me these days. Spring is always a rush. Flowers bud, bloom and petals fall in just hours as the sun chases night across the sky.  Within a month we have days of spring, summer and fall crammed together like a mixed race family, each with their own pleasures and pitfalls.

I watch a bluebird househunt in the morning, build a nest in the afternoon and lay her eggs while I am sleeping that evening. The purple iris blossoms race each other down the strong stems while spewing out grape scent across the yard and finally giving way in the strong rains bowing down to the lawn.  My roses cover the arbor and then in what seems just a day or two drop all of their lovely pink petals like best wishes at the wedding march. 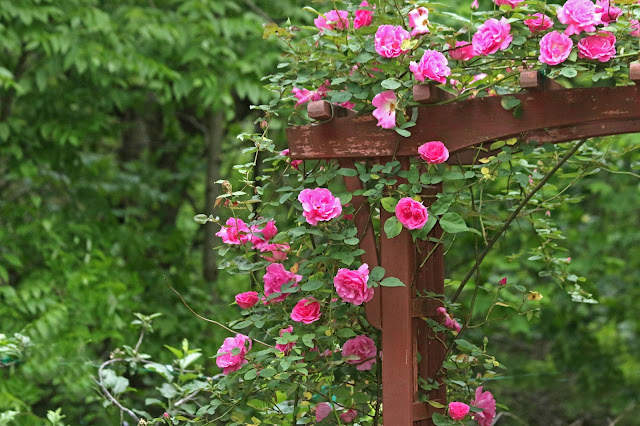 My days have been full of tasks and errands and trips and schedules and spring continues on her way not waiting for me or anyone.  My obligations are only on my time.  Her time is hidden somewhere in a space continuum over which I have no control and little awareness.  Did you know that a long time ago towns had their own schedules and set their clocks without coordination of any nearby village?  Their time/space continuum did not depend on anything other than their view of how fast the sun was moving.

Time is relative.  Someone, somewhere, has a spring that lasts at least a month.  They sip tea and watch the morning sun kiss the buds of roses and then watch as Dianthus burst forth with their cinnamon scents and pink lace-edged blossoms.  They watch the bird building the softest of homes with bits of grass and tufts of seed pods along several days. 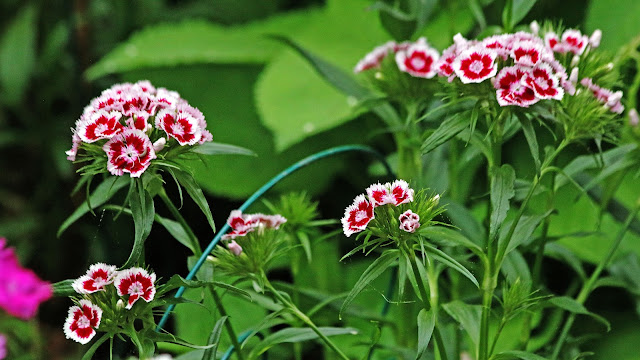 Mother Earth has her own time clock.  It goes so much slower than ours that we miss the melting of icebergs, the increased flooding of coastal planes which climbs each year, the death of tiny microscopic beings that hold hands with larger microscopic beings until entire coral reefs centuries old are gone...and so on, and so on.

The data gatherers notice these things because their clock moves much slower than mine.  They can gaze over decades past as they thumb through their well-worn penciled notebooks of graphs and numbers and they count the changes in meaningful ways.  Soon this earth time will catch up with us all. 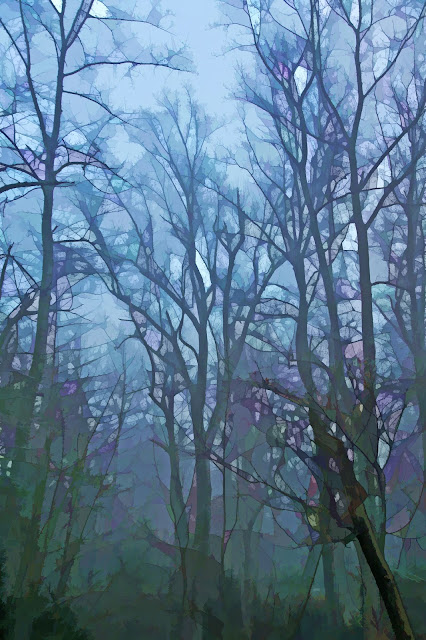