Thanksgiving week was very nontraditional as we headed with children and their families to Marco Island, Florida for the week.  I will post a "few" photos later that show warm sunny days when our coldest days up north start driving me nuts.  We ate out at a very nice restaurant for a TG dinner which was better than many homemade I have eaten.  Only $40 a head for adults and $20 for kids and a huge buffet, so not as expensive as it could have been.

Said "Goodbye" to them yesterday (hiding my tears) as they boarded the plane and then we drove to Hollywood Beach on the other side of the state.  I slept 10 hours straight last night and hubby slept 11.  We must have been more exhausted enjoying the grands than we thought.  In and out of pools playing shuffle board, pool, boccie ball, putt putt golf, beach walking and shell collecting.  Yes, it was one of those perfect family holidays with as little tension as can be expected with six adults and 3 kids.

Today we drive out to visit my husband's parents' grave site in Fort Lauderdale and then probably we will find a nearby park to explore.

We are in Hollywood Florida now which is surprisingly very Cuban in mood.  Not the rich Cubans, but middle class and other Cuban families enjoying a vacation with the grandparents and kids on the beach and brickwalk on the Atlantic Ocean.  Lovers holding hands, children trying to kill us with  wheeled little trikes, and adults helping an elderly aunt down the promenade.   Almost like an Atlantic City without the gambling.  We do not hear much English, although there are some white heads like us.  Photos to follow.

Almost ready to go home, but hubby is not, so we will be on travel another five or six days.
Posted by Tabor on Saturday, November 28, 2015 14 comments:

Years ago, when I lived on a tropical island just north of the great continent of Australia, I would run into the lone or pair of Australian tourists enjoying the moderate Muslim culture in which I lived daily.  I think it was at an ex-patriot dinner party where the length of the evening found many had slid into more than moderate drinking and comfortably into politically incorrect talks, that an Australian fellow on his fourth (or fifth) bottle of beer said he would never want to live in America.  What a bunch of wussies we were.  Rules and more rules.  "My God you cannot spit on the sidewalk without some Jack telling you to hold your spit."

Of course, most of us who live in the U.S. do not see that kind of  petty rule enforcement and we are probably the first to take a somewhat dim view of police officers wasting their time on such.  Unlike Singapore we CAN chew gum in public.

Still many Americans think we are a land of too many regulations which put a stranglehold on business and growth.  This may be true, but I have been unable to get a small business owner to give me an actual example of some ridiculous/unnecessary rule that brought his business to a standstill or cost an unreasonable fee as a follow-up to his statement. They are there, but we cannot protest against them if we do not publicize them.

BUT I can think of rules that I want kept in place that protect citizens from highway robbery.  For instance we now have more homeowners using solar and wind power to reduce their consumption of energy.  This costs them money up front in setup, but over time the effort reduces the size of the bill from the power company.  Every dollar saved by a homeowner reduces revenue for power companies.  The power company may attempt to tack on fees if you install a renewable system, and they may try to charge you for sending power back to them by a process fee.  Currently we have regulations that do not allow utilities to raise the cost of energy just because they are selling us less and they want to improve their profits!  I like this rule because heating our homes is a necessity, unlike other things we may buy.

Other consumers are buying more efficient appliances that reduce their consumption of power from the grid. Replacing light bulbs with high efficiency LEDS means you use up to 80% less electricity. Smart thermostats cut back on use of heat or air-conditioning when no one is at home.  All of these are cutting into the bottom line of your utility company.  I can guarantee you if we did not have consumer protection regulations, you would be using less energy from utility companies and paying just as much if not more for that.

This is just one of the many, many regulations I support.
Posted by Tabor on Wednesday, November 25, 2015 11 comments:

The news of the world that has ramped down my mood with its dystopian stories has cut me low and lost.  I keep searching for a post that is worth both your and my time.  I find that any ideas are like die rattling in my head and I am rolling no numbers.  I am leaving Wednesday early for travel and have a post written at a prior time that will post tomorrow.  Maybe I will have time on my trip?

The sniper and my fear (years ago) where I worked?
The update on the situation with my math student?
The book(s) I am reading?
My travel over Thanksgiving? 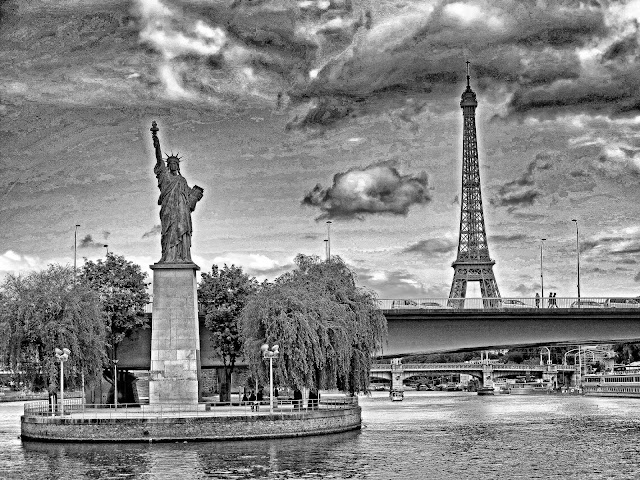 AND of course I  also weep for Beirut, Syria and other places where religious craziness and  pathological anger kill innocent men women and children.
Posted by Tabor on Saturday, November 14, 2015 12 comments:

The Challenge of Things to Come--Thursday 13

OK...no more depressing thoughts...unless you add you own.  But here are some facts (most gleaned without added footnote links) for you to actually add to your arsenal of knowledge.  If it takes only a good guy with a gun to stop a bad guy with a gun, it takes only a good brain with factual data to stop a bad idea or foresee and avoid the consequences of said bad idea...or some such paraphrase like that.

Winter is less than a month away, although our fall has been oddly warm.  It was 80F two days ago!  I got my daughter-in-laws bulb-garden-birthday-gift almost complete and looking forward to what she will see in the spring.

I came back to find that my clematis has put forth two blooms and my cosmos seeds (volunteers) have sprouted as seedlings.  They will die, but it was a surprise.

I also am enjoying the abundance of our garden that remains. 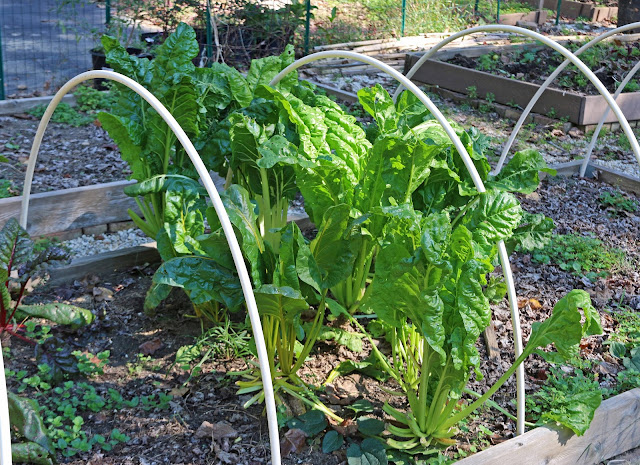 This Swiss chard is huge but very tender. 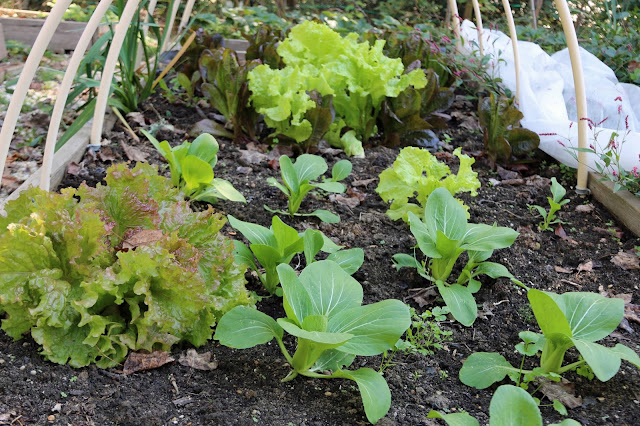 Lots of lettuce and bok choy for salads and side dishes and fried rice. 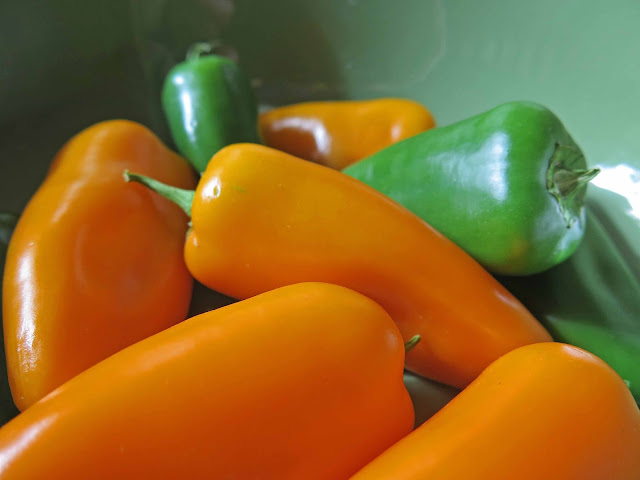 The last of these sweet long peppers are almost too pretty to eat. 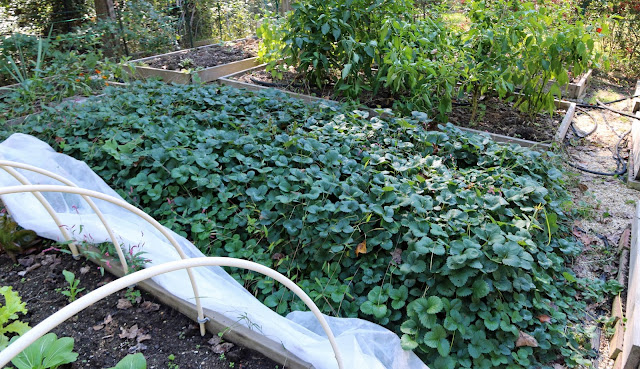 And it does look like strawberry jam in the spring.  This bed is out of control!
Posted by Tabor on Sunday, November 08, 2015 17 comments:

Tilting at the World

There were a few of my readers that felt the discussion of a dystopian future in the prior post was too overwhelming and depressing for thought.  There are those who are in the hands of God and feel they have no understanding of the future or what God has in mind and therefore focus on the day to day.  There are others who feel evil is a constant battle to be waged and they will pass tools onto the next generation to keep mankind safe and whole.  Then there are people, like me, who tend to be agnostic about the whole process, always refusing to give up the challenge, but also feeling the battle will not be easy and each turn must be analyzed carefully and sometimes solutions are very hidden behind our prejudices.  I know there is a precious goodness in mankind that means we will return whether in small numbers or large to restore beauty and love to the earth and to humankind no matter what dark days we go through.  Whether we are fighting religious fundamentalists, Bible belt salesmen, the unexpected results of our technology, or deeply greedy and evil leaders, we must prevail in our vesting of this planet and this civilization.   I also feel strongly that we cannot forget.  We cannot allow evil history to be buried and forgotten or we will continue to make the same mistakes.  We cannot be afraid that there is not enough to go around.  We cannot see human groups as "others."   They are us and that is sometimes frightening.

Can you not look as a small child's face and know that your job is to stay aware and to always be brave?  You are their guardians of their future and you must prepare them before you hand over the reins to the young in the days to come.
Posted by Tabor on Wednesday, November 04, 2015 14 comments:

The Future is Somewhat Dystopian

I just finished reading a book that explained to me that my desire for a strong middle class is a futile wish.  This segment of society will diminish as technology replaces the more mundane jobs and tasks within those jobs, including writing scientific theories(!) and even teaching.  This is already happening with computers collecting and analyzing data for everything from how our blood reacts to drugs to how a product can sell to the why of the disappearance of some esoteric insect.  We just need a handful of people to understand the data that drives an answer.  All that will be needed is about 10% in each profession to be the bridge between the computer and man or the designer and tinkerer of technology.  But since these, about 10%to 15%,  will be very well paid, the upper class will grow.

The disappearance of jobs means competition will be fierce and the victory will go to the focused and very smart students who understand the technology, those students for whom numbers are a fascinating puzzle, those who like cyphers.  Robots can replace all the low end jobs and even things that are not supposed to be jobs such as sex.  The poor class will grow larger.

Then the author goes on to say that there will be no class revolution.  The poor will have lots of cheap food, cheap entertainment and cheap housing to numb them.  They will accept that this is their lot in life.  They will not be the beneficiaries of cheap health care, though.  Since it is paid for by others, it will be parceled out even more judiciously and sparingly.  I am not saying I agree with this, just reporting on what was written.

The book is titled "Average is Over" by Tyler Cowen, recommended to me by our financial adviser, who should be most worried about his job  with the growth of the use of computers to crunch numbers....

P.S.  This view neglects the importance of creative thought and creativity in all the art forms that we love.
Posted by Tabor on Sunday, November 01, 2015 21 comments: