For me, this warm month is just the opposite of that physics where the sun hits a balloon and expands it to a nice bold size where it can bounce around with joy.  The sun (and resulting heat) hits my soul and deflates me as if all that hot air (that some might say I have an abundance of and love to share) disappears into the cool air conditioning and I collapse in a semi-coma on the sofa like a limp shadow of myself.  I search about for just the tiniest bit of energy to finish one last chore but every ounce seems to have retreated to the shadows.

My husband, on the other hand, is full of energy.  He has so much energy that just sitting still mid-afternoon might give him a heart attack and he cannot bob his foot long enough before he must jump up and begin another task.  He can always find some chore outside that needs to be done and come back in an hour later drenched in sweat looking like an Olympic swimmer with victory all over his face at the success of completing another chore on an unbelievable August afternoon.

This week he asked for an evening canoe trip after dinner.  I had put him off too many times and with his birthday (number 69) just around the corner, I knew I had to agree.  I indeed felt too guilty to turn him away one more time.  This wasn't really a 'canoe trip', because he attaches a small wooden transom to the stern of the aluminum canoe and starts a small gasoline motor that moves us through the humid air drying the sweat from our brows as we skim the water.

We crossed the inlet of the finger of the river and headed to the open waters where most boats had already reached their home dock in the waning evening. 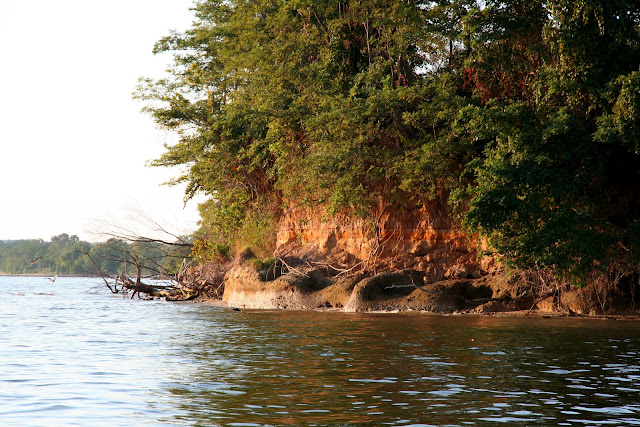 We disturbed two birds (barely seen on the far left of this photo above) as we passed the area of the shore that is an orgasmic retreat for the fossil lovers at our local museum.  The dirt is like cement, so only the most dedicated would dig for fossils here.

I was concerned about the setting sun since our canoe cannot be seen by motor boats very easily.  Hubby handed me some bow lights and I spent a concerted effort while bouncing on a small chop trying to attach them under the lip of the bow in front of me.  Finally I was successful and when I tried to turn this red/right green/left light on I pushed and pulled without success.  I called back in frustration after my painful efforts.  Hubby explained with a carefree smile that that he had been having trouble pushing the light switch as well!  So we scooted on into the gray light without lights. 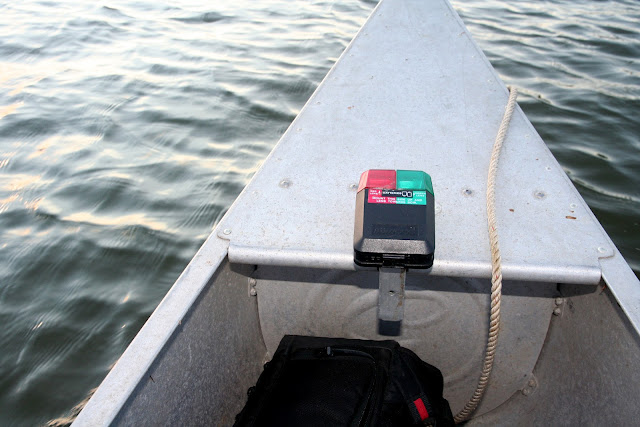 We pulled into a quiet beach that was exposed at low tide just to poke and explore and say a blessing for another day. 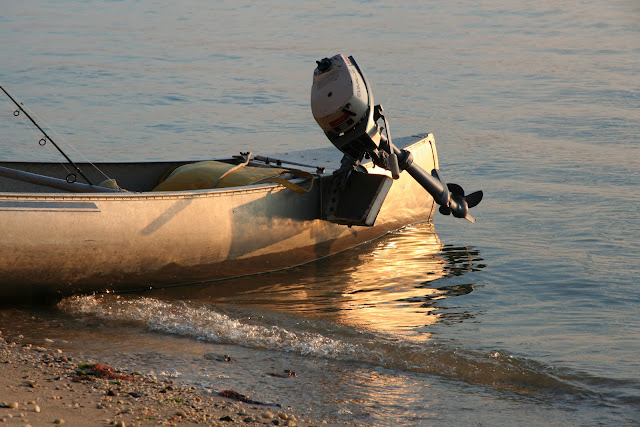 The beach was initially quiet and colored shells and pebbles decorated the shore. 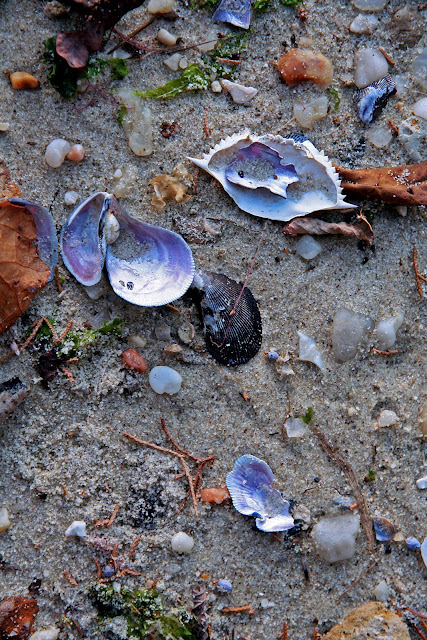 I was just beginning to enjoy the end of the day when two energy addicted folks crossed the sunset with more enthusiasm than I have seen in quite a while.  Why am I the only one whose account is empty of energy? 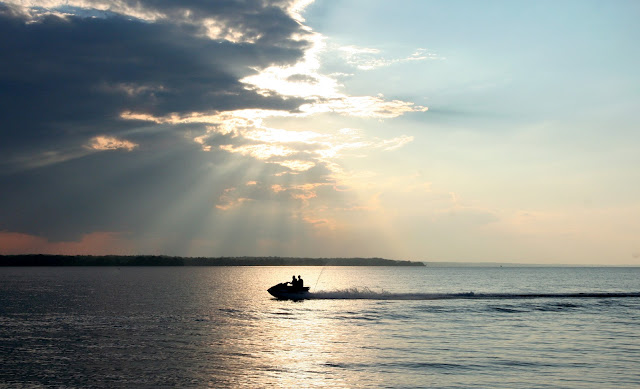 I sat on a log and it groaned open mouthed.  No sympathy here. 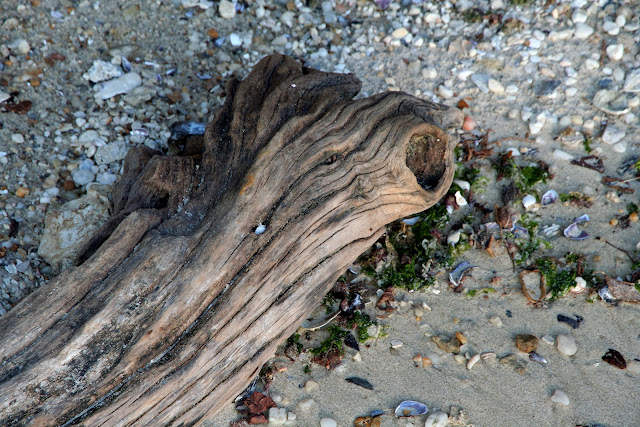 Finally we got the sunset we were waiting for to recharge our spirit. 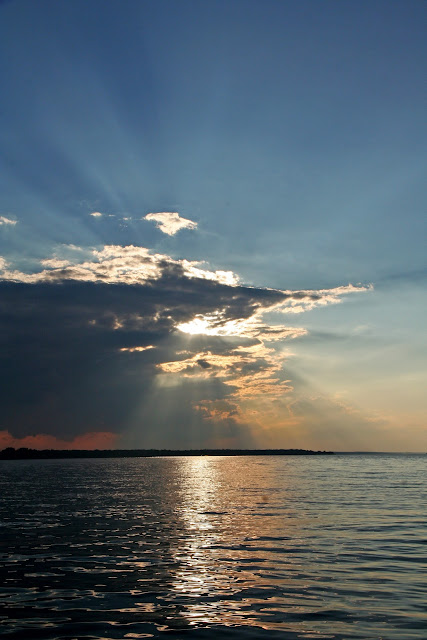 And just like an Olympic warrior in celebration of a great challenge hubby held the torch high as we made our way home. 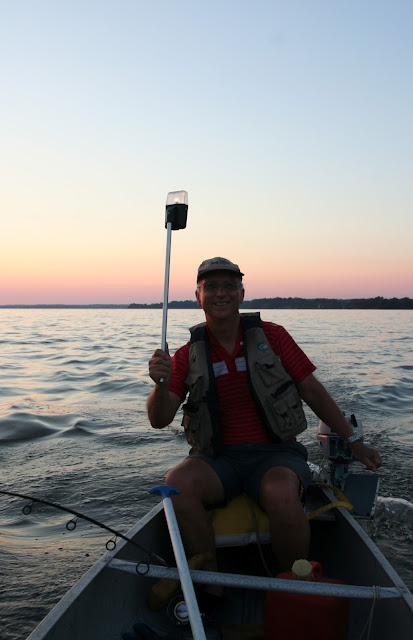 Five Words That Changed My Life

I somehow knew that Kenju would be most interesting in sending me my five words for the blog meme that she recently completed. I do not complete memes in most cases, but my posting creativity has been dwindling and I thought this meme might be a motivator. "For this meme, you write about five words as they apply to your life." I could be nice and put the definitions...but I think most readers can look them up in the online dictionaries. I must admit that I found this meme more uncomfortable than I thought as I progressed and the title of this blog is a lie!

brave: I have learned bravery by allowing/making myself to live in other cultures in other countries with people who do not speak my language. To be removed from all that you know and to have your ideas and beliefs challenged on a daily basis and to be forced to really think about communication as a means of solving problems, is a brave way of living. To survive this challenge and allow yourself to change is also brave and I think I have successfully traveled through that fire.

epitaph: This word is the scariest for me, but not because I fear dying. I just think that there is not much I have done that is memorable in this life. I have tried to live a good and honest life but that in itself is not worthy of a memorable epitaph. To me an important epitaph means you have changed the lives of others for the better in a significant way. I hope I still am granted a few more decades to work this out!

salute: The image that this word brought instantly to my mind was when some of the Republicans made fun of how Clinton saluted his marine staff, clearly showing he was not part of the military. When I see this word I remember when I allowed the conservatives to take my patriotism away from me. I allowed myself to question how I was showing my real feelings for our soldiers and I regret that. Now I know that I have always supported our troops and that all of our brave troops are both conservative and liberal in their philosophies. Being true to my beliefs does not make me unpatriotic any more than wearing a flag on my lapel makes me a patriot.

tempest: Over the years I have learned that I hate tempests and now I always avoid them. Tempests created by crazy relatives with bad habits or self-centered and insecure co-workers are the worst! Ninety-nine percent tempests are false and artificially created to distract and dismay. The only real tempests are those that have to do with the weather. My philosophy these days is to listen to and to share my time with those who can remain calm in the eye of the storm. The storm will pass and you will notice that things will be much the same if the tempest is not real.

(Want me to send you five words?)

Darlene tagged me for a meme. I do not usually play along with these, being a bit of a spoil sport,but Darlene has a most compelling blog, so I will do so. In addition, I actually played this meme once before...but it was on Facebook and I was reading All Fishermen are Liars. The rules are to pick the book nearest to you, turn to page 161 and copy the fifth sentence.
I will post the meme from the book closest to me right now...I am not actually reading it as it is a reference tool published in 1999 and already out-dated, Real World Digital Photography by McClelland and Eismann:
The book(s) that sit on my end table near my bed and which I am currently reading actually are:
From Onions to Pearls by Satyam Nadeen, a kind of weird book about awakening. I don't know if I am going to like it or not. Bought it at a used book sale.
Outliers by Malcom Gladwell. Another good book of his; this one is about demographics and genetics and the luck of the draw.
(And, of course, anyone who wants to play along, please do so.)

Friko tagged me for a meme a few days ago. I don't usually play along, but I have just gotten back from a funeral and am not yet in good blogging rhythm so decided to take her challenge. I wrote these answers shooting straight from the hip in about three minutes total. Only #11 and #15 caused me to pause and come back to them after some thought. If you are up to it or in blog stasis and need an idea I challenge you to play along.

1. If one song were to describe your life, what song would that be?
"She'll Be Coming Round the Mountain When She Comes." (In other words, eventually I will get where I am supposed to be, I hope.)
2. Which item of clothing do you wear most?
"Underpants" (Cute lacy things ;-))
3. When did you get up today?
6:30 AM---I actually slept in!
4. Last thing you bought?
Rose fertilizer
5. What are you listening to:
The Pink Martini (I saw them last week live.)
6. If you were a God/Goddess, who would you be?
Diana--she was the tough one.
7. Favourite holiday spot?
Some place that I have not yet traveled to. (Although if I never get to travel again I will say Bali.)
8. What are you reading right now?
A Thousand Splendid Suns
9. Favourite Film?
Out of Africa
10.First thing you do in Spring?
Smell the earth.
11.Funniest thing you saw in your life?
Well, I have answered all of the questions and come back to this and thought and thought. Something funny 'seen' usually means slapstick humor or a pratfall and I don't find those so funny anymore. I guess I haven't had a good belly laugh in quite a while and things I remember don't seem so funny anymore. (Now when we start playing a game of Ballderdash I sometimes laugh so hard I can wet my pants.)
12. Who is your hero/heroine?
Right now it is President Obama, but there have been many others before.
13. Share some wisdom?
Don't forget to breathe deeply as you start your day.
14. If you were a tree, what tree would you be?
A banyan...a big fat banyan.
15. Fictitious character/s who made a lasting impression on you?
Had to think for a while because most of those who impress me are real people, but I guess I will say Kermit the Frog and secondly Charlie Brown.
16. Four words to describe you?
Picky, happy, creative and curious. (Also fiercely loyal, but that makes a complex five.)
17. Why do you blog?
Why not? What else can I do with my words that, so far, gives me some complimentary feedback?

Accepting this Meme challenge from Colleen to write a six word memoir:

I have a few for a quick blog entry on this busy weekend. (I am in the process of moving into my house on a permanent basis over the next two weekends and this means going through more clothes than a 'non-material' girl should have. In other words, being retired means I have no excuse for all the material I have hanging in my closet!)

1. Living one day at a time
2. Forever looking for my inner peace
3. Life was too short for me
4. I needed one more beach walk! 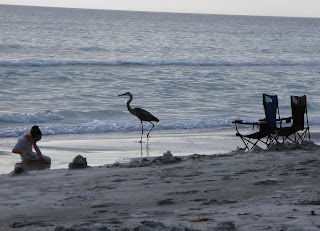