And the b(h)eat goes on

(I know, its pretty pathetic. But my brain is fried.) 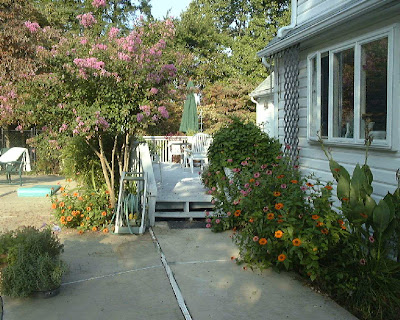 I can remember a long time ago when the start of summer meant sleeping late and then moving to the hammock outside on the lawn, still in my pajamas, with the first book from the top of the pile that I brought home from the library in my hand. And then I was lost for the rest of the morning in another world until my mother's patience wore thin and she had me doing errands or ironing or cleaning.

I miss the fresh joy of youth. The kick-up-the-heels giggle at long warm days at the small town swimming pool. I miss the bookmobile that stopped at the end of the road and, like a metal wrapped present with smells of musty paper, offered adventure and travel and more laughter. I miss the energy of chasing after the ice cream truck and licking creamy hands as the ice cream in the cones melted faster than could be consumed.

Feet were always dusty and dirty no matter how much we swam or bathed. We never wore shoes. Bikes were for racing and getting a cool breeze going in your face and then hitting the top of the hill and putting your feet up on the handle bars and coasting down the long road on the other side.

If there was errand money, I could spend the afternoon in the cool darkness of the movie theater, and then after the movie ended and the credits rolled being totally disoriented emerging in the bright light and heat of the day feeling as if I had just landed on some alien planet.

Now I only notice the details of the season in passing. I spend most of my time in a climate controlled office and hear the complaints of others about the heat. Here it is the first day of summer and the crepe myrtles are starting to bloom! They used to be the late July flowers. They were what I planted for late summer color when all the other plants had wilted or dried under the intense heat. Is this global warming? Or just because I live in the micro-climate of the city. Or am I just being forgetful?
Posted by Tabor on Thursday, June 21, 2007 10 comments:

Stole this blog title from an article I was reading in the local village voice this past weekend. The article I read in addtion to "Full Fathom Five's Father's Day post motivated this blog entry. It really should be posted in my Room Without Walls blog, since it is about my outdoor rooms, but, I think after reading MLF's entry, other people are also good Samaritans when it comes to helping these slow and gentle creatures--although I don't think her turtle was a box turtle.

Anyway, her husband actually stopped traffic to help a turtle off the highway on Father's Day. And in perhaps not an odd coincidence, we did the very same thing the morning of the very same day. We were leaving the house and heading up the hill just beyond a blind curve. I made hubby put on the hazards even though the road was quiet, because the teenagers sometimes take that country road like a speedway. I dashed out to pick up this small box turtle and put him gently in the grass on the side of the road where he was headed.

We have at least two resident box turtles in our land at the house. (I guess when I finally move there full time I won't keep making the above a qualifying statement.) Anyway, one is particularly lovely with the brightest yellow.

Earlier in this same weekend when I was sitting in my easy chair I came across an article about box turtles. This is what I learned: Box turtles are rare in our area. They need a "mosaic" of environments to survive---more than just woodlands. Picking up the animal can be stressful and endanger its health. If you move a box turtle too far from its path or turn it in the opposite direction, documented research shows that it can become disoriented, dehydrated and eventually die. The author did say that you can pick up a box turtle on the highway and help it go in the direction it intended.

So, we did our good deed and maybe saved this rare fellow who might have been a father. So, now you know.

Here is something that may be of interest to those of you who find birdwatching more than a past time. The Birdwatcher's Guide to Global Warming
Posted by Tabor on Thursday, June 14, 2007 2 comments:

1) I still can't get the image out of my mind of hitting a brick wall and facing lots of unending silence when I retire. I am so busy these days it will be hard to wind down over the next year if I decide I can afford to retire. Going from everything to nothing is kind of scary. No challenges? What will I do?

2) I am on page 27 of "blink" by Malcolm Gladwell and thus far most intrigued.

4) Did you also know that 90% of toys you buy for toddlers are battery operated? So much for environmental sustainability.

5) On a good environmental note, did you know that a salmon protein recovery venture in Alaska means they want to process fish waste into usable oil products. In an article from the Alaska Journal of Commerce "Lane estimates that Taku Fisheries processed about 10 million pounds of fish annually, and given about 35 percent waste, was grinding and dumping some 3 million pounds of fish wastes annually. "
Now where in pristine Alaska were they dumping all this, I wonder?

6) Did you know that Thomas the Train stories were originated by a minister and that some of the episodes are narrated by Alec Baldwin? Yes, THAT Alec Baldwin.

7) My daughter has moved into her next house and with the help of her parents and friends is really 50% done. (She still has lots of stuff at our house...she will be taking that back sometime soon, won't she, don'cha think?)

8) I spent much of Sunday afternoon unpacking daughter's boxes. I will wager that every single person that had a wedding (no matter how long ago and no matter whether it lasted or not) has at least one kitchen item that still has the bar code on it.

9) I am moving into my daughter's house at the end of September. Apartment rent here has increased another $300. She has a basement bedroom and small extra kitchen but is about an hour from my work. Ah, yes, another challenge in my life.

Look at this shirt in the photo above. It looks pretty pathetic and used doesn't it? Looks like it has quite a history---maybe it was worn when painting a few walls, washing a boat or two? It will not surprise you when I write that my husband does not throw anything away if he thinks there may still be a use for it. It may surprise you that I know the exact age of this shirt --- 35 years old this July.

This shirt entered our lives in 1972 when we were living in Palau, Micronesia. It is a shirt made by my own hand. There are no shirt stores on Palau, or at least there were not any stores like that when we lived there. I was quite the little homemaker back then and for hubby's birthday and in anticipation of a potential trip back to the states in the fall, I made him a couple of shirts. I French seamed them if you notice that kind of thing. It still fits, if you note that kind of thing. It is stained but not falling apart.

I must have been a pretty good seamstress for it to have held up this long. I know that I can't sew that well today. Also, they made better quality thread back then. My husband is sweet to hang on to it this long. I am pretty sure that I don't have any clothes of my own from way back when...nor could I get into them. I think I weighed 105 at 5'5"!

I had another one of those awful days at the office. People coming to complain about stuff I have no control over. Other people defending their reason for not being able to do something that was technologically doable ten years ago. Finally someone concerned about public information I sent out that they didn't think should be public, although by law it is. And, of course, the 15th response to some budget defense for a budget that doesn't happen for at least three more years!

I need to retire. I am too old to get caught up in this carnival of agonies. Some days, and thankfully not every day, I HATE my job.

So I am going to do something about it! I am getting my boss to approve a shorter workweek, and my boss is amenable, being a short-timer. It will be at some financial cost , but I am so stressed that I think it will be worth it. It will also mean I have less clout with other staff, but I am tired of fighting battles.

I am asking the retiremnet people to crunch the numbers and if they are not too painful I am going to trade time for money. Anyone else done this?

After a day like today I will have several sleepless nights before I get back to normal.