I went on a large Disney cruise years ago and the person who coordinated it said it would be wonderful because I would never have to worry about seeing my grandchildren.  She was absolutely correct in that I never saw the kids except at dinner and that made me rather sad.  There was manufactured fun on the ship or lots of sitting around on the ship or exercising on the ship and nothing to see but the ocean for hours.  I disliked the whole experience.  Our stateroom was small with no windows and very crowded since we also had the 'pac and play' for our youngest and tucked her in each evening.  Therefore, I will never go on a cruise with over a thousand people like that again.  Whenever we came into a port we disgorged lots of people and swarmed over stores and restaurants like nasty bees.  We got only one beach day after all the confinement!  There were lots of sticky sweet tropical alcoholic drinks, if that is your cup of tea!

This Viking river cruise was so different in that there were no waves, no manufactured fun (well a little) and the room was just a little more spacious and the groups for tours were much smaller-one bus load.  The views were always interesting as you could see the shore each and every day and most of this part of Europe is not ugly industrial.  The cruise director and all of our guides had a wealth of knowledge about the area and its history and answered our various questions completely when we saw something curious or wonderful. 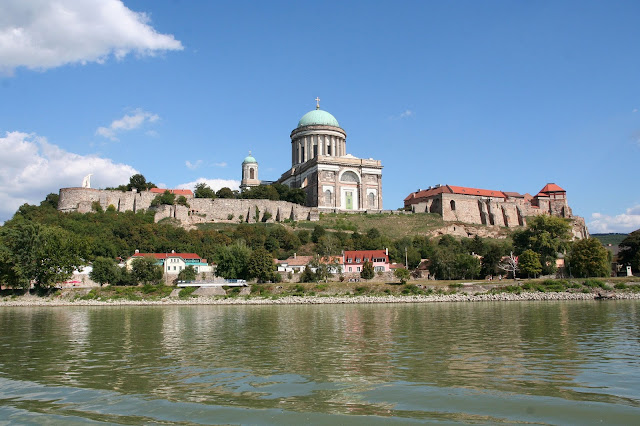 One of the responders to a prior post voiced concern about how the lower level staff could be treated (mistreated) on a cruise ship.  It is my understanding from the upper level staff that Viking works very hard at keeping good working relations and decent living conditions among all staff.  I do know that the ship interrupted their schedule to stop at a small town to let off one of the lower level staff who had a family emergency, and they provided him with a train ticket to Vienna and a plane ticket home.  Yet, I am sure their living quarters were tight on board ship and I do know they worked very long hours.

We did learn that the Danube can be a ruthless river and the flood this last May left devastation to these lovely old medieval cities all along its coast.  Where our guide is holding his hand is the level of the flood waters of that most recent flood in May of this year in the city of Regensburg, Germany.  All the other dates and marks written on the wall are other floods in this town dating back to the 1500's.  The people do not have flood insurance to cover losses and the government no longer allows them to live on the ground floor.  They may use it only for business. 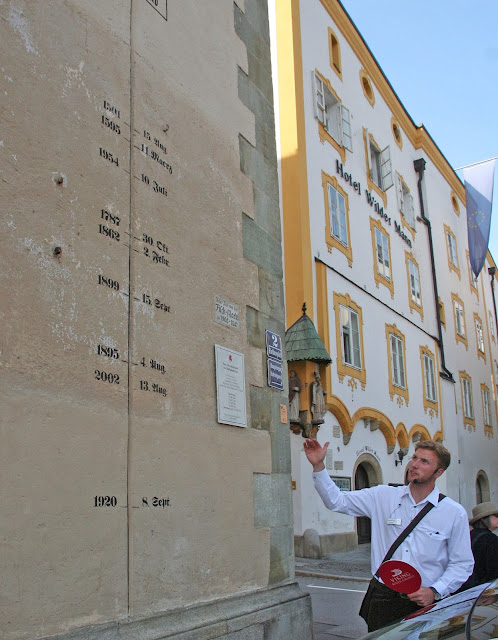 Perhaps that is why this tattoo parlor on the ground floor is so sparsely furnished? 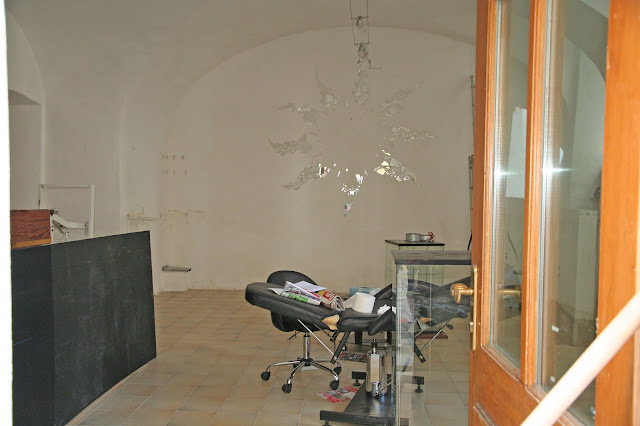 Most of the architecture away from the river is not as old as it looks.  Many parts of the various cities were rebuilt or restored after fires and wars and are not original...but you would be hard pressed to recognize that restoration except for their clean condition.  They paid great attention to detail creating buildings that looked like the original.  They are proud of their heritage and proud of their link to the past and their part in the history of the world.  But I did get the impression that the Germans were most happy to pause only shortly at WWII sites for tours and quickly move on to the wonderful medieval history that reflects their history so much more fully.  They know that those of us from the new world are most fascinated by this much older history and most depressed by the most recent World War.

There was a small mix-up in the call for the tour guide and this lovely woman in black had left mass (it was Sunday) to come guide us through her hometown of Regensburg.  She appeared to be late until her son, the young man in the photo below this, appeared and said that he had been scheduled for the tour which resulted in the mix up in names.  Honestly ladies, which guide would you rather have?? 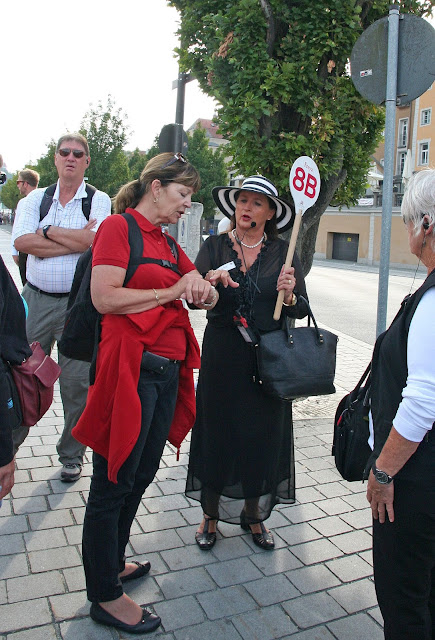 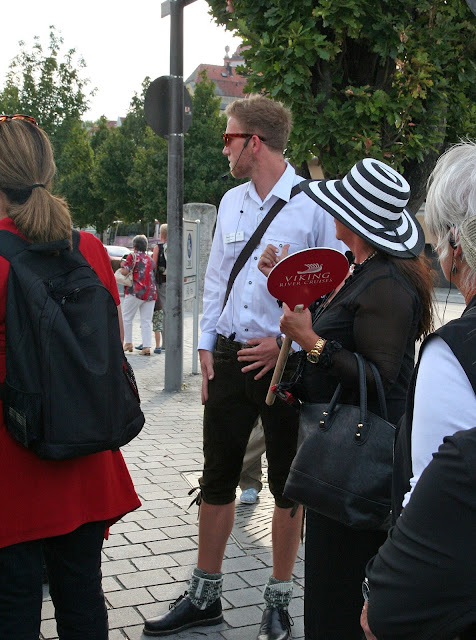 Just as an aside, our guide's lederhosen belonged to his grandfather and he had just inherited them from him as a gift and was most happy as they were far more comfortable than his newer ones.  He explained that it might take years to break in lederhosen to a comfortable wearing level. His shoes are a traditional Bavarian half shoe.  Isn't he scrumptious even right down to his shoes? 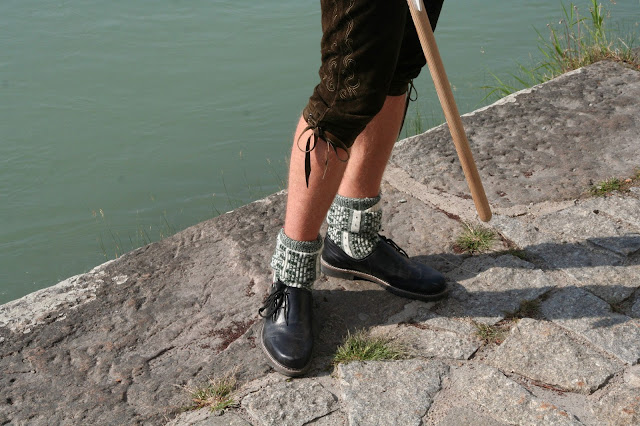