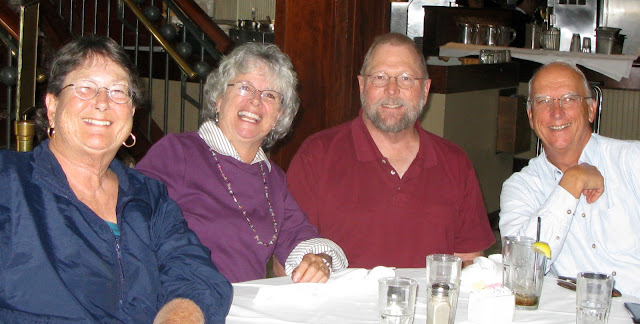 It is such a gamble when you agree to meet-up with a blogger that you have never met but have followed for several years.  You may know more about them then you do some members of your family.  They know where you stand on politics, religion, and life, because they have followed you for several years as well. You both know where you can agree to disagree and where you can be so totally in agreement that you can laugh out loud.  I guess the only time it would be of concern is if one of you was not very honest on your blog and portrayed yourself as something other than what you are.  (Then to add to the mix, you bravely bring you husband along who has no idea who you communicate with on blogger or even why you do it.  Throw in that fish out of water and who knows where the day will end.)

It seems, to me at least, to be the anomaly of blogging.  People are so straightforward and honest when writing to 'virtual' strangers and more reticent when talking with real live folks each day.  Perhaps it is because we have to live or work with those 'live' folks and cannot dare to trample on feelings or embarrass them.  If it goes awry with a Blogger, we just stop visiting and push the delete key on our blog roll.

I am sure that professional writers who blog have a much different take on these meet-ups because they ARE the writer.

The greatest tension of the day was that we drove up in the new car, the car without a dent, scratch or smudge.  We were going to park near my daughter's house and metro in, but since the cost would be almost the same, we parked downtown.  We found a place to park in the Bowels of Hell.  Behind Union Station and several levels below ground and below the Kaiser health building and the Securities and Exchange Commission is a public parking area, one where you do not have to pay by the month or give up one of your limbs.  It is an enterprise run by a company that parks people every which way and leaves only room to pass by inches in the entry and exit.  $15 for the whole day, which in any city is a steal!  BUT the place is crammed and you have to loan your keys to young men who speak little English and they park your car for you in spaces in underground garages where you never should park a car! It is not without exaggeration that hubby turned over his keys with much trepidation, thinking our little Camry was on her way to a chop shop and never to be seen again.

As luck would have it I suggested that we meet at a restaurant that unknown to me had closed a year ago and I left my cell phone in the car in the Bowels of Hell.  What an auspicious (always wanted to write that word) beginning.

In spite of errors we successfully met up with Mage of Postcards and her husband yesterday for lunch.  She is an aficionado (always wanted to find a reason to write that word as well) of architecture.  So we met up at the beautiful building of Union Station in Washington, DC which is a little more than an hour's drive from my home.   I recognized them holding hands as they walked through the archway toward us.  They were on their last day of a 10-day trip, and I swear, even though confined to a scooter most of the time, Mage hit EVERY SINGLE place of significance in the city.  And she is not the type who 'scoots' through an art museum, for instance.  She reads up before she gets there and then reads all the information while she is there.  She explained why the netting was stretched above our heads in the Union Station lobby.  It seems that debris may still be falling from the earthquake a few months ago.  Then before lunch ended her husband took my point and shoot camera and showed me a feature that I probably read about years ago and yet never used!  Mage (or as I later learned to call her Maggie) has a newer model of my same camera.  I now have even less excuse for blurred photos.

All four of us are talkers which meant there was little in the way of silence during the entire lunch.  We laughed and hugged and people watched and took photos.  An outside observer would think we were long lost relatives who had found each other after decades.  While many bloggers have meetings of each other lots of time, this was only my second meet-up of a Blogger, but I am most satisfied that it turned out much as I optimistically expected and I hope the same for them.