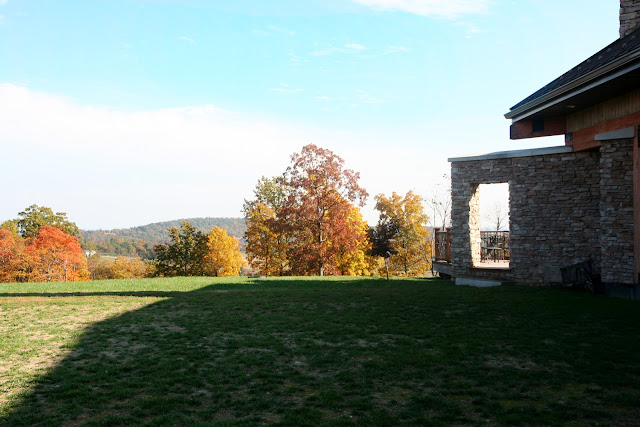 The world is a better place due to wineries and I am looking forward to the day when they are available on all country trips...well, at least that is my opinion. We stopped at this winery in the photo above in the apple country in Pennsylvania last week. It has only been in existence for about five years.  Yes, my European and South American readers can turn up their noses at this. We are babies in this industry, at least on the east coast, and  I admit, most of the wines reflect that in lack of sophistication.

This winery is called the Hauser Estate Winery and the building itself is brand new. I was told by the visitors center staff in the town when asking for directions to the winery to look for a lovely building on a hill. Well, one person's "lovely building" is another person's new and somewhat boring rock structure.  They do have the catbird's seat on the hill, though. 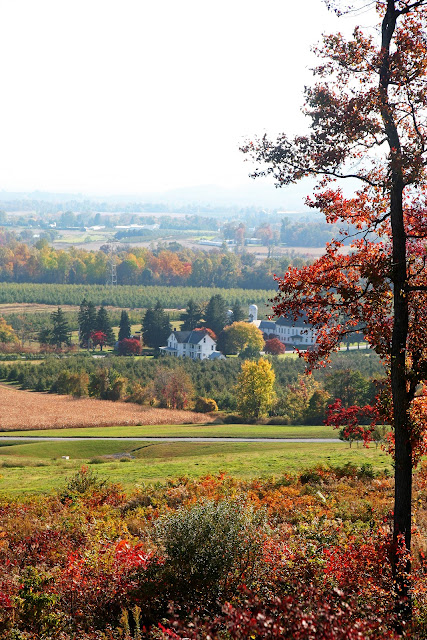 This view is across an agricultural area known primarily for its apple orchards.  One can purchase a glass of wine and sit out on a very large patio and drink in the scenery along with the fermented grape juice.  They even have shawls and wraps near the door to borrow on cold days.  On our day there was no need for anything but a light sweater.

But this post is more about the conversation that I had with the woman who poured our (my) wine.  (They have apple cider for those who want a less strong drink.)  She is the (one of the?) granddaughter(s) of the man who created Musselmans apple products in America, most famously you may know the applesauce.  Her mother and two aunts have built this winery as their new enterprise and 80% of the grapes they grow are used in their wine.  The daughter went on to say that they were moving into the wine industry because it now was cheaper to import apples from China to make applesauce then to grow them in our own country.  It now is cheaper to import apples from China to make applesauce in this country then to grow the fruit in our own country!  We no longer manufacture most things in this country...we don't even grow fruit economically it seems even with the rising costs of fossil fuels!  What would Johnny Appleseed say?  Or, perhaps, he viewed this on a much smaller more personal scale when he took his trek.