While in Jamaica, we spent most of our time taking tours and getting the lay of the land.  We spent only two half days on the beach, a few hours snorkeling (and in all truth actually never made it into any one of the swimming pools...but been there and done that.) While we could have rented a car, they drive on the 'wrong' side of the road and they also drive like crazy people sometimes.  Our J*** shuttle from the airport had a police radar active and it went off several times during that dark night as we took our speedy 2.5 hour trip to our hotel.  They told us most of the road accidents occur with tourists who drive on the 'wrong' side of the road or drive too 'slow.'  I think this means less then 15 miles over the speed limit.  We did not see any accidents while there, so perhaps the danger level is far lower than it seemed during our longer van trips.

We did walk up Dunns River Falls which is a tradition I told myself I would go through.  Hubby had done this 40 years ago (with some dingy blonde in a tiny bikini when there was like one other couple) with absolutely no hand bars, decks, people with cameras, signs, chains of people holding hands, refreshment stands, people trying to sell you photos, etc.  Thus, my experience this time was far different than his original adventure.  It is a climb of about 3 football fields up and the only danger is the rapids which are so rough you cannot see where you place your feet.  My only injury was a skinned shin when hubby decided to help me make a rather large step up by pushing on my butt!  The other discomfort (other than masses of people) was the gravel that kept collecting in the river shoes.

Sorry, no photos.  Too wet for cameras and the only photos they took I did not purchase and I am way too vane to print anyway.

We also took a newer tourist ride...on the bamboo raft down the Martha Brae River in Jamaica.  It is a gentle and very safe little adventure.  I was hoping to see exotic wildlife, but only saw exotic craft/refreshment booths.  The guides were wonderfully friendly and also knew their history and most of their botany. 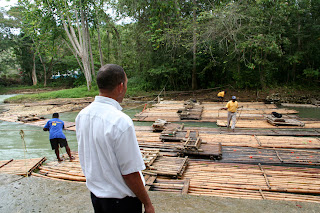 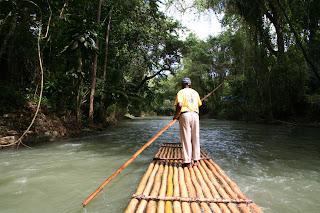 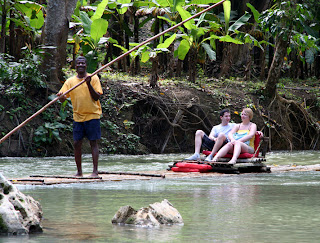 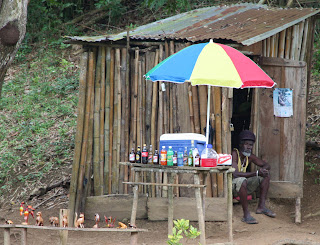 No, that is not hubby and I on that raft in photo #3 but a charming young couple from Britain that went on the tour with us!  (And if you want photos of the birds and buds you have to check out my other blog.)