My Own Little Discovery Show 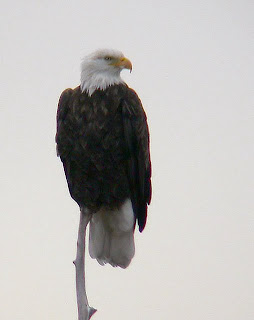 (This photo taken from http://www.johnsonmill.com/birding.html
I will get a telephoto someday!)
“Hey, Tabor, come look out the window!” hubby said with excitement in his voice

I looked at the direction he indicated and high on a snag above the river sat a bald eagle. Hubby ran to get the binoculars --- that expensive Swarovski set that I bought him five years ago and which has panned out to be one of the best gifts I ever got him.

He generously handed me the binoculars first to see the close up of our visitor. He was definitely a male in his prime. His colors were lustrous and his feathers full and rich in the cold afternoon. The eagle then gently lifted his wings and glided closer to another nearby snag. That is when I saw he had a fish in his talons. He landed on the branch and I could see the silvery menhaden flapping against the branch as it hung down caught only by one claw.

The eagle ‘eagle-eyed’ his domain and then took a small bite from his sashimi meal. The menhaden continued to flap while the eagle continued to nibble. This predator prey drama was not for the weak of heart. The eagle would pause between bites and survey the river at his leisure. This lasted for just a few minutes more.

Before long, a crow flew in to a branch just above and to the right of the eagle with intimidating body language and a noisy jabber indicating clear interest in the mid-day lunch. In a very short time a second crow joined him and landed just above the first. Both seemed to me to be too close to the eagle. Daring black bullies they were. Two more flew in and landed to the left of the eagle. One of these flew down looking for fragments of flesh on the forest floor.

The eagle had now changed from the leisurely meal with a view on the water to the fast food manner dictated by the nearby company and he soon finished the fish. He proceeded to clean his bill and claws on the bark of the tree and the crows eventually lost interest and departed.

The eagle sat on the branch for almost an hour longer letting us observe him and giving us an excuse to halt the Christmas decorating. Then he took off, swooping with breathtaking grace down the river making a dip at the far end…too far for us to see if he caught dessert.
Posted by Tabor on Monday, December 04, 2006