Traveling by Air Once Again

Certainly, aging changes travel skills. I usually return exhausted and ready to get back to my normal routines. This time I was much more emotional and sort of "out of time".  I felt lost at times during the day and actually had problems remembering where I had stored stuff before I left.  I did sleep like a hibernating bear on the trip and at home which I do love after my problems with coughing last year.
The actual flights, scheduling, and going through security were extremely efficient.  We flew United and have their credit card and they made it so easy to check in at home or at the hotel in San Diego or at my sister's house each time we needed boarding passes.  Many people used their phones to show the QR code, but I found that at least a few times the airport reader would not work as easily with the phone screen as it did for those of us with our paper printed codes!  (I also always worry about having a phone with no power.)  We were able to check in our bags at the kiosks very easily as well.
Due to hubby's memory issues, I have found that I have taken over all the scheduling and checking in.  BUT he made all the reservations before we left!  I think that when he is stressed, his memory fails him more and there is nothing more stressful than standing in an airport line or waiting for a taxi.
Our airports were relatively empty during the times and days we traveled. 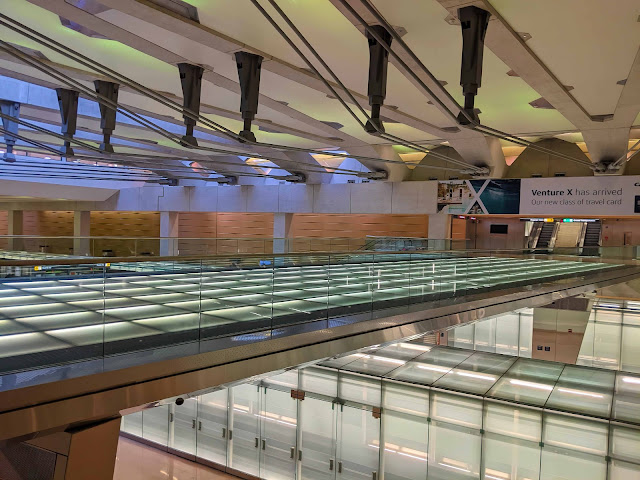 We were off the pre-TSA list as we had not flown for years, and were no longer subscribed.  Therefore we did not have the luxury of being pre-checked with TSA.  The security lines had different rules at Dulles, San Diego, and Denver.  None required shoe removal if you are over 75.  All required removal of electronics. Two required removals of my DSLR camera.   One required me and hubby to go through the body scanner while the other two did not.
It was hard to wear masks during the entire time you were at the airports (unless eating) and during the entire flight, although you could remove them if you were eating the snacks and drinking as long as you replaced the mask between sips and bites.  It was hot and if you were dragging luggage from one end of a large airport to another, the mask did reduce oxygen intake! We encountered no mask idiots on the flight thankfully.  99% of the travelers followed the rules.
We stayed in the Gaslight District in San Diego.  Very touristy, expensive food and only touristy stores to shop.  But since I live in the country, these were all treated as temporary issues.  It was within walking distance of the parks near the water.  The architecture was certainly varied. 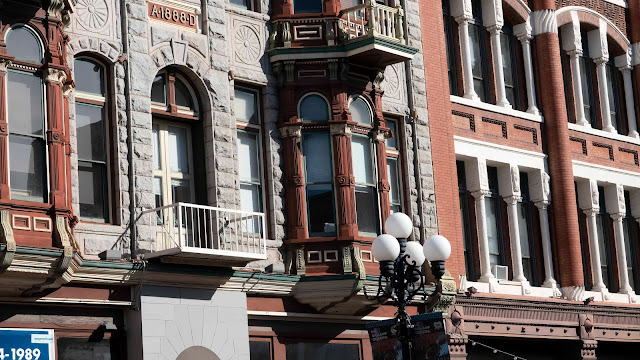 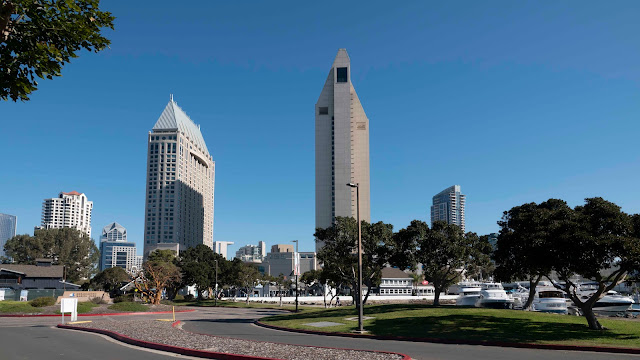 And, as you can see there were no crowds! 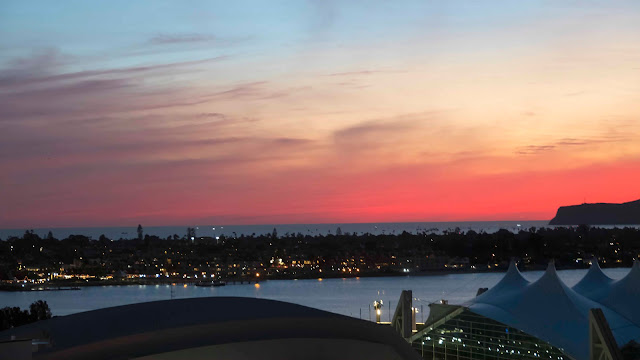 We got some great sunsets from our hotel room which looked over the water in front of the Convention Center.  (Hubby's conference was up in Mission Valley instead of the large center here.)
We Ubered everywhere and that cost $19 to $30 depending on the trip.  Considering the cost of gas and the luxury of not having to find parking for a rental car, we thought this was quite acceptable.  I downloaded the UBER app to hubby's phone and he was able to navigate back and forth by himself on the two days that I did not go to the conference.  He hates phone apps, but when motivated...
I took a few hundred photos and will not bore you with them all.  In the next post I will add some stuff about botanical visits, hubby's speech and include our visit with Mage and George since I know that bloggers love to read about others' travels...not.  Thanks for bearing with me.
Posted by Tabor on Saturday, March 12, 2022