Find Me an Empath 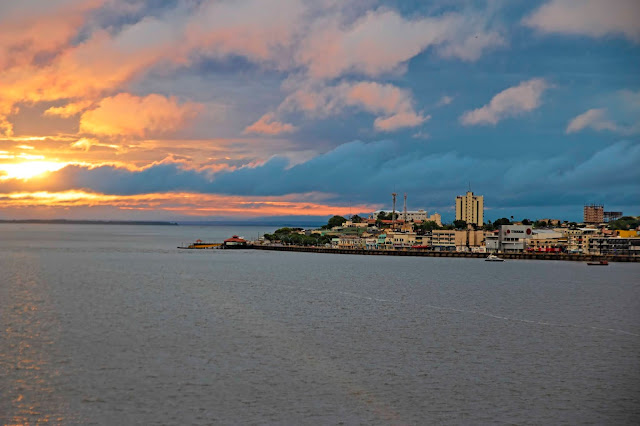 The photo above was taken back in 2018 during our Amazon trip.  I have posted about some of this adventure before.  This was a cruise where we went up the better part of the Amazon on an ocean-going cruise ship.  The city above, which looks modern, was not truly ready for cruise ships and clods of tourists, but certainly ready to find a way to extract money from them.  I say this not disdainfully.  They are poor and enterprising people just trying to find a way to stay ahead while living under a corrupt regime with horrible inflation.  Three to five percent of the total income of Brazil is lost to corruption.  It is a tragic way of life.  (Of course, our Congress allows wealthy companies to write the legislation that helps them avoid taxes, so we certainly cannot pretend purity here.)
The city was muddy, rainy, and busy.  The people were poor but polite.  There was criminal behavior.  I have emblazoned on my brain the face of a man in his fifties that just wanted to take people on a bicycle/cart ride around the city for some money.  He waited patiently at the dock as each passenger disembarked.  It was horribly rainy and so no one was willing to ride.  His face was so unbearably sad.  My husband gave him some money, but that would not stop the suffering he faced each day and would feed his children for only a short time.
This is the city where the Brazil variant of COVID emerged in early December of last year.  The more contagious brand.  Manaus already had 75% of people infected [in the spring of last year].  Now 27 to 50% were vulnerable to this new version.  It just does not seem fair.  Why must some people suffer so?  Why is empathy now considered a weakness among leaders in the U.S. and other countries?
At mid-day, I am going with hubby to a drive-through facility where he will get his second shot. He got no reaction to the first, but I am hearing a second can sometimes make you feel as if you are coming down with the flu--a simple trade-off to avoid the hospital oxygen tent.  It does appear that by the end of spring the majority of Americans will be protected from hospitalization and/or death if not from getting sick even with the current varients, so that is a good thing!
Please be kind to others.  It is so hard these days to just put one foot in front of the other.
Posted by Tabor on Wednesday, March 03, 2021