Again With the Small Talk

Not everyone talks to their wait staff when eating out,but I frequently do.  I am "elderly" in the sense that I may not talk to anyone other than my husband for days at a time.  Here in the country we usually only run into repair people.  They are on the clock and not usually chatty...although some are very polite and endure my husband's insistence on bending their ear.  But recently I talked to my wait staff.

Since this country is one of the wealthiest in the world we do get a number of immigrants, in spite of what spiteful candidates may tell you about how we need to close our doors.  Our service industries are run to a great extent by those from countries with no democracy, no opportunity, and no promise.  People who have no choice, but come to us for a fresh start.

My trip this fall during Thanksgiving to Florida resulted in quick talks with a young man at the restaurant who was so very helpful and polite in waiting upon us.  Since we loved the view of the setting sun, we went twice to the restaurant for dinner and got to know this waiter better. 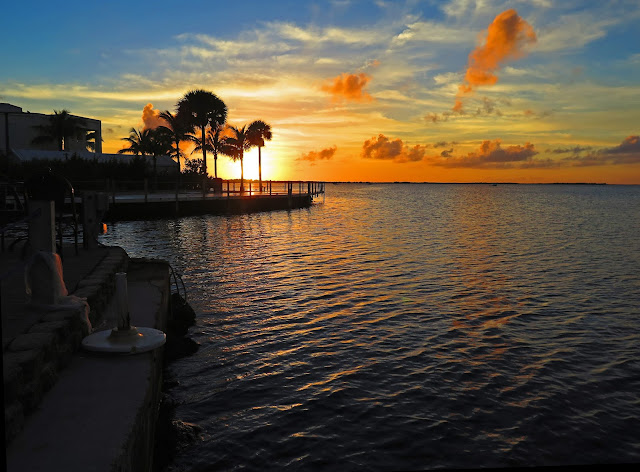 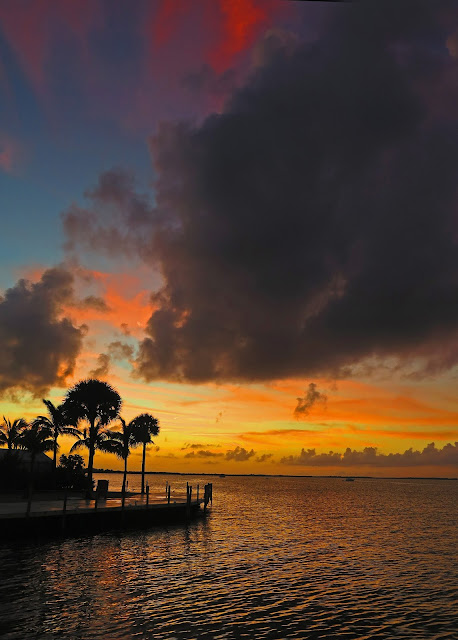 The place had an elderly cat that pretty much had the run of the place and caught my photographic eye.  He worked around the tables like an old sailor at a bar.  I am sure if he had had better eyesight he would have joined me on the table for dinner! 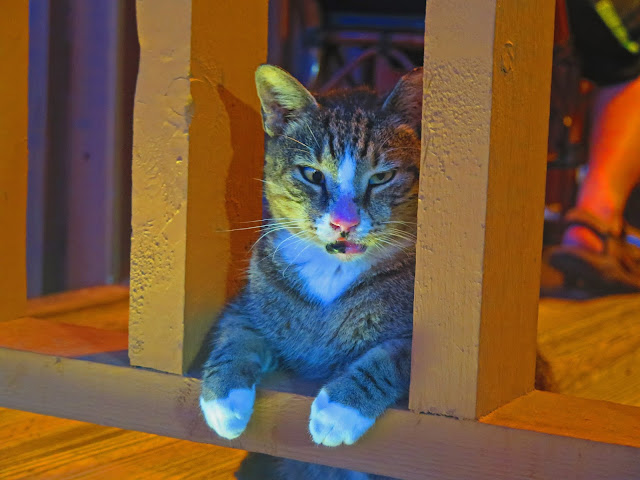 Anyway the young man, who actually was very androgynous much like "Pat" on Saturday Night Live and caused my husband and I some quiet discussion, had medium length curly dark brown hair and wore a gold earring.  He explained that all of his family still lived in Cuba.  He told us that life in Cuba was very hard.  People were very poor and the newly opened tourist industry from America may make little difference.  He said he did not bring money to his family who he visited every other year because they had nothing to spend it on.  They could not buy any more food than allotted and it was against the law to raise animals for food.  Obviously Cuba is still very restrictive and still very much a harsh country.  So sad that being hungry will not be alleviated by any harder work or more money on the part of the citizens or a growing tourist industry. Just a boat's ride away and I am sure that they are thinking very much about change.  But change comes slowly.

There is another person I met the other night when my daughter took me to dinner for my birthday, just she and I at a new Spanish tapas restaurant in her neighborhood.  It was expensive as are many innovative places just outside the city.  Most customers from that neighborhood make six figure salaries some even mid-six figures, and that supports such places.  I rarely get to these interesting restaurants and have fun with my daughter buying all the odd foods and great wines---even though I think some are overpriced.

We had to get there early because we had another activity at 7:00 PM and so we were one of the few customers .  Our waitress was a short and medium built blonde with attractive features and a very attentive and pleasant attitude.  She had an accent that we could not place, and I, being the nosy elderly one, asked her where she was "from."  She explained she was from the Ukraine.  I mentioned I hoped I would  have an opportunity to visit her interesting country some day and she said that she  hoped it was not too soon as it was a very sad country right now.  Poverty, war, and  Russia had made her sad about her family and the living conditions.  She said it was not the wonderful country it used to be.  We did talk about the way they celebrated Christmas with a 12 plated dinner of wonderful foods, which were then stored outside on the very cold patio and eaten throughout the rest of the week.  The 12 dishes are meatless and represent the 12 months of the year, pre-Christian and something to do with honoring their ancestors.

It is not totally irreligious as "After a prayer the father will anoint each person present with honey, make the sign of the Cross on their forehead, and say, "In the name of the Father and of the Son and of the Holy Spirit: may you have many good things in life and in the new year.""

I do love the way many countries hang on to such traditions because parts of our country move forward into the next year ignoring all the symbolism replaced  by sales and economic success while pretending we are celebrating a religious holiday.

I asked her about her social life in this country and she explained that at first she used to go to the bars with the young people looking for a social life but found all young American's wanted to do was get drunk.  She was looking for conversation, music, and maybe dancing.  So now she hangs out with a few close friends and has given up the American bar scene.  She did not tell this tale with any anger or criticism.

I find it important to be able to talk to people from far away countries without the work and expense of a plane trip and I like to see the world through their eyes instead of  my well-coddled view.   We are a global melting  pot an becoming more so.
Posted by Tabor on Monday, January 11, 2016