If You Are Getting Married, Remember the Dirt!

More than ready, I had packed everything, including the new summer wear that I had purchased at the Dressbarn.  (I only shop at the most fancy places.)  I had gone to the big mall, but the high end shops did not have anything that appealed to me.  Instead I bought a black and emerald green Capri pants and top set that looked pretty good with my newly smaller figure.  (I lost only a little weight, but with Spanx I looked better than I had hoped.)  I also bought a bright orange outfit for the rehearsal dinner which was a BBQ at a state park.  In the event that you did not get the memo...oranges and blue greens are the 'in' color this year.  It was hard to find anything in other colors!

Son had to ride up with us and could not leave from work earlier than 4:30 in the afternoon which meant we faced a 6.5 hour drive in the evening.  Shortly as we were heading out of the city, the bride texted Son about an errand.  Son turned to Dad and asked if he brought the 'dirt.'   I looked at hubby's blank expression.

"Remember, Dad, I asked you to bring some dirt from the yard."

Hubby continued to look blank.  Hubby is not a good person for details.

I gave him a confused look.

"You know, like lighting the candle?  We are planting a tree."

I began to feel like I had missed a good part of this wedding ceremony already.   Should have I packed garden shoes and gear instead of the jewel toned summer wear?

Well, we did not have any dirt from the yard and were already an hour and a half from our home.  Son had not grown up or even lived in our current home, anyway.  So, hubby, who is a master at fixing his forgetfulness, left the freeway and pulled into a side street by a small stream that ran by the high school where son went so many years ago.  I had clean doggie doo-doo bags in the glove compartment which had been useful for grandchild baby diapers.  We pulled far off the road and Son went tromping along the weeds down to the stream and collected dirt into the little bag and was soon back in the car and we were once again on our way. 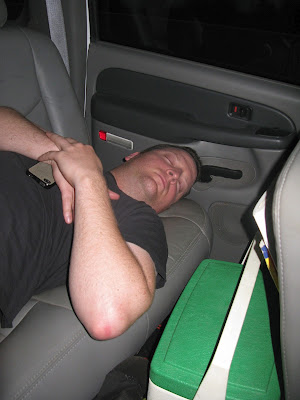 No pre-wedding jitters from him as you can see in the photo above.  He slept most of the way, hubby drove, and I took photos of the changing weather front across Pennsylvania, hoping it would settle down in the coming days for the outdoor wedding. 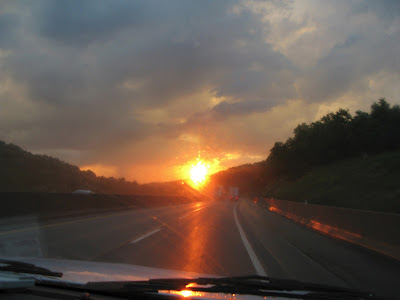 We got in just before midnight and the bride-to-be picked Son up at our hotel to take him back to her parents home about five miles away, which is a bit of a modern arrangement, is it not?  We checked in and found our room through the mouse maze of a newly remodeled hotel and collapsed on our beds for a restorative sleep before the busy days ahead.

This "tree planting" union ceremony glitch was not yet over, though.  The next day we discovered that the Mom and Dad of the bride had purchased a tree at the local greenery.  It was the smallest one they could find and was over 4 feet tall.  Too tall to place on a side table at the ceremony.  You can see the tree table just behind the bridesmaids in this photo.  Not a good idea for a large tree! 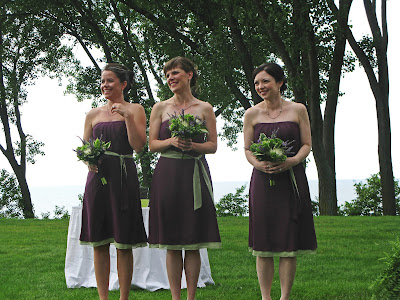 Eventually it was decided that they would dig up a burning bush that had been replanted from her grandmother's yard the year before.  It was very healthy.  It was the right size.  It came from her 90-year-old grandmother's yard AND from her parents yard.  We could work with that symbolism.  You can just see it between the two bridesmaids on the left of your computer screen in the above photo.  I will briefly explain another glitch was the rains at the in-laws house had forced an ant nest into the bush pot and we had to contend with that before bringing the plant to the ceremony by soaking the whole thing in water for a few hours.  (I really should have packed garden gear and clothes!)

Now if I can just keep it alive in these torrential downpours until they return from the honeymoon... 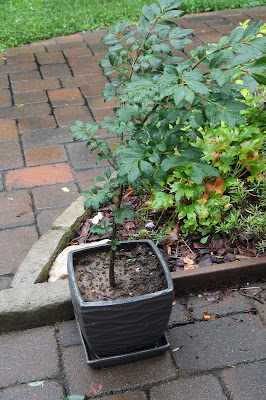