Discussion for the Masses

I am sitting here in my bed with laptop at hand.  Hubby is waiting for the United States Presidential debates to start in just minutes.  I cannot watch them in real time before I go to bed.  It will start my mind like a squirrel in a cage or a hamster on a wheel and I will be up all night!  Thus I am recording the debate and will watch it tomorrow with breakfast.  I will play the DVD quickly to make sure the talking heads on the news shows do not skew what I am seeing before I see it.

The moderator, Jim Leher, is a great old man who has provided many, many years of great news for me.  He gets criticized because he is not aggressive enough.  It appears that many people do not know what the role of a moderator is.  I also think that attitude means too many people think politics is about fighting and the presidential debate is about war.   They just don't get that it is about enlightenment and elaboration, as much as is possible in this powerful environment.

Everything is so fine tuned, as I think they had to agree to 25 items regarding the debate.  I doubt it will reveal much that I don't know about either candidate, but maybe they will surprise me.  I also doubt that it will change anyone's mind except for the rare independents who are still undecided.  Got an email from the President stating that he was getting ready for tonight's debate but he would still like me to kick in a couple of hundred dollars to help him win.  That sure warmed the cockles of my heart.

How many millions of dollars of negative ads do they think citizens can watch before they totally tune out everything?  It is wasted money.

Anyway, below this graph from an artist on that famous Mad Magazine is being passed around on Facebook and I thought it was humorous enough to post regarding the debates. 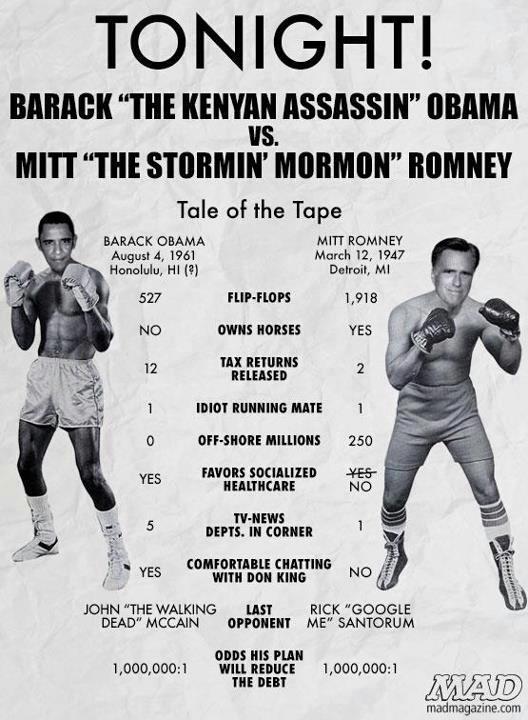 For those who are not U.S. citizens, please forgive us.