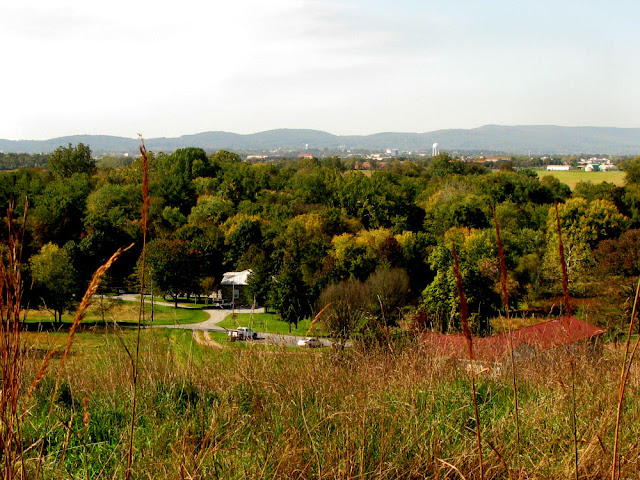 It has been eleven days since my careless accident.  The swelling is almost gone!  The pain, while at times unbearable if I twist a certain way,  is mostly minimal as I limp around the house.  I feel lucky that this was not as bad as it could have been at my age!

My cabin fever reached a peak yesterday and I asked hubby to take me for a ride in the country side.  Our goal was to reach the mountains which are about 2 hours away, but along the way we encountered a detour.  It seems a bridge had washed out in the last storm and the road had to be closed for repairs.  This was a major state road. I live in an area of meandering coastlines and rivers and marshes.  Some of you know this means there is rarely a straight line between two points.  This a bridge being gone means we had to detour an hour north to find another crossing.  Sometime during the long detour we decided to fore-go the mountain trip and just explore the nearby countryside and visit a few state parks in the lovely fall..

We pulled over to the side of the country road that passed beside neat Amish farms and brought out our road map to see what might be close (the Truthsayer -GPS- was in the other car).  While holding our heads bent close over the map we heard a loud tap at the window on the driver's side of the car.  We looked up and saw a women in her fifties with frizzy hair, casual clothes, and a very tired look on her face.

Hubby rolled down the window.

"Can you give us a ride up the road." she asked in a gravelly voice caused by many years of smoking.

We both looked at the 'us' and her companion was a twenty something girl dressed in a red striped shirt and too large flowing plaid pants.  She could have been wearing pajamas or a costume.  Not the type of clothes most 20-somethings would be caught dead in.  Both looked pleading and the older woman was panting as if she had already walked a long way.  We hesitated only shortly and complied.

I could smell the cigarette smoke as they entered the back seat.  The trip several miles up the road was to reach a friend's house since the woman's car was no longer working.  The woman just oozed stress and was a very sad candidate for living as she explained how her luck had run out this month.  A sister had just died of cancer, her father had just passed away and the house she inherited from him was being managed legally by another sister who had borrowed money against it and had a gambling problem.  This morning the final bad luck was a car that wouldn't start.  (Yes, I have encountered story teller shysters before, but these people did not ask for money and were able to look me straight in the eye.)

We dropped them off at a small rural house with several cars scattered around the open field.  While we felt sorry for their situation, both hubby and I felt more sorry for the young girl who followed her mother up the dirt road to the door.  Already in her short life she was trapped in poverty.  She would probably marry the first economic light that entered her life and if her luck ran out she would be just like her mother in a decade or so following the same mistakes.

These are some of the people that President Obama says live paycheck to paycheck.  They are not smart nor industrious nor understanding that they make some of their own bad luck.  But in earlier times, before this recession, I wonder if their life might not have been so harsh as they got by week to week.