Two-Days in the Boonies 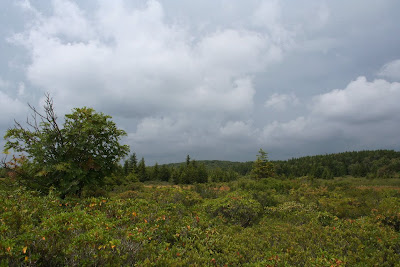 The heat and humidity along the Bay had worn us thin. It seemed that just walking out to the shed would result in a necessary change of clothes when one returned. We decided to celebrate our 39th anniversary in the mountains instead since the days that followed were going to be busy with relatives and houseguests. We were able to book a room at the lodge for $69. Do we know how to celebrate or what? The problem was that the above view was the weather that greeted us when we drove to the mountain ridge for our first afternoon hike (we really sort of saunter). The clouds in the distance grumbled and growled finally bringing a small downpour our way as we hurried back to the car where we sat for a long while watching raindrops pelt the dusty windshield. (The danger on these high meadows is the ligntning...not so much the rain.) 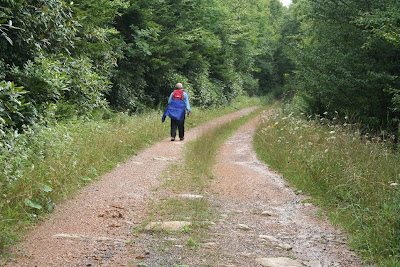 We decided to drive down the mountain and found a place below the clouds that was just misting moisture and not threatening a full-fledged shower, and found this old road that was a perfect hiking trail. No slipping or sliding along muddy rocky trails. (This was the area where I photographed the red salamander which I will post about later on my other blog.) 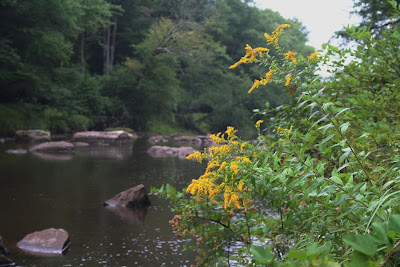 We also traveled another nice trail that followed the Blackwater River just outside of Davis, West Virginia. They have a spillway dam and camping areas and several new trails. The goldenrod was in full bloom reminding us that all of those great autumn colors were soon to be revealed as fall was hovering nearby. 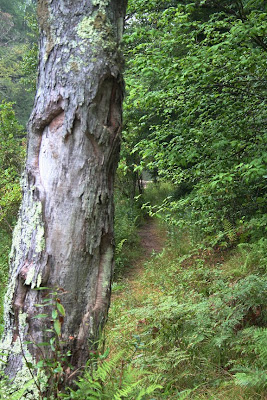 Some trails are marked and others just become intriguing green paths that make you wish you had all the time in the world to wander them and see what new vistas will reward you. 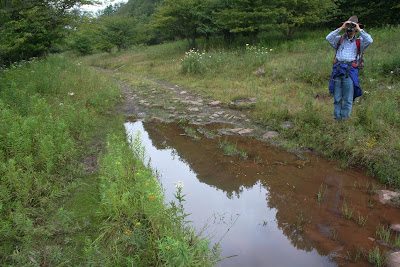 This trail might have been an ATV trail until the ATV's were banned. (Thank God or the powers that be, says Tabor under her breath.) The recent rains made it a challenge to follow. When deciding where to place ones' foot there was either sloppy wet mud or boggy Muskeg on either side. I knew that my new waterproof hiking boots were worth the money when my feet stayed dry and hubby ended up with very wet socks. 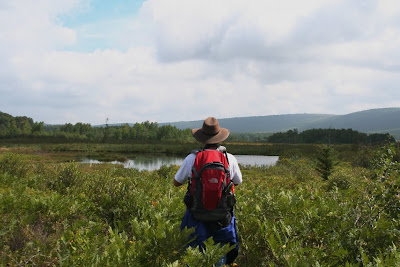 The trail formed a loop just as we came to a beaver pond in the sunken marsh at the foot of a large meadow we had been edging. Most of one side of the marsh was wreathed in brown cattails as warnings about the wetness of the soil. We saw two brown hawks in the distance and even though we were very careful and quiet we scared a few pin-tail ducks at the far edge of the pond. We wandered down to the Muskeg edge and saw the remains of a very small deer that had perhaps been a wolf's or fox's dinner. I can visualize the predator enjoying a nice dinner as he looked over the quiet pond. We moved on up to the side of the hill and set out our lunch with the million dollar view of the pond in the distance on one side and the meadow on the other. We shared cheese, salami and crackers. Cut into juicy fresh Asian pears and peeled some Clementine oranges and then topped the meal off with cookies and dried fruit and nuts. Best restaurant we have eaten in all year! Although there were deer flies about, none bothered us while we recuperated our energy on the fern bed in the shade of the trees. 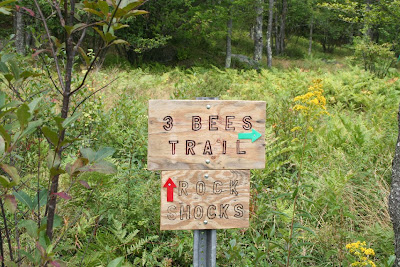 We encountered even more new trails for another visit on our drive out. They seem to be reaching for creative trail names! There are hundreds of hiking trails in the area. I think we will never be able to trek them all.