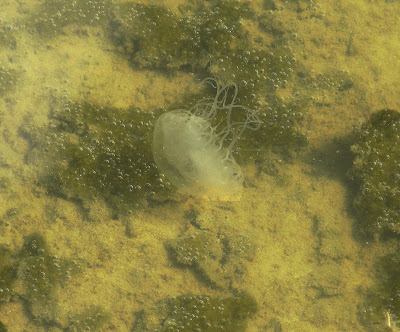 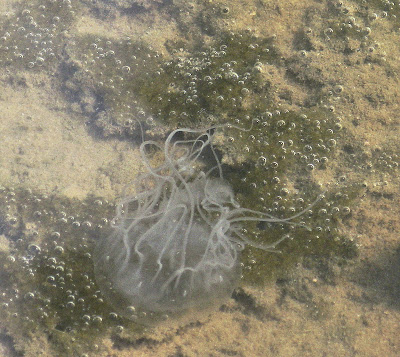 These are the sea nettles of hot summer that like soft and gentle bubbles come floating in on the tides to all parts of the river from the Chesapeake Bay. They look so innocuous and carefree, but a brush against the little white tentacles will induce a fiery sting to tender skin. They come in tiny and large sizes; the one above being about 3 inches and they can reproduce when only 2.5 inches wide. They can grow as big as your open hand. They pump just below the surface of the water in search of food. This one was trapped in a tidal pond that was only a few inches deep. If the water is compromised (not healthy) the jelly fish are greater in numbers for some reason. The population is determined by both temperature and salinity but some scientists say the increase may be due to more nutrients being dumped from towns and cities running into the Bay to create more floating creatures to sting and eat. This year we do not have a huge population. If people are very concerned about these they can check the population movements for our area here.
My grandson was lying belly flat on the dock to look at some fish and crabs the other day and came away with a burn from some sea nettle slime that had landed on the deck falling from the crab traps placed there. He is a drama king but the sting must not have been all that bad, because after a wash with ammonia and a spray of Benadril he was A-OK and on to a new adventure.
I have been stung by jelly fish (NOT the Portuguese-Man-Of-War) in the South Pacific and while it really burned, the pain did not last long. Like many of the stinging/biting creatures of the world, the reputation sometimes exceeds the actuality.

P.S. Yes, this belongs on my 'other' blog but I have several posts waiting there already.
P.P.S. Logged into my email at 4:30 AM this morning when I found I could not pretend I was sleeping any longer and found a note from my step-nephew who is arriving for a weekend visit today with his girlfriend. The note said "I think I forgot to mention that A**** is a pescatarian." NOW he tells me?!!
Posted by Tabor on Saturday, August 22, 2009