The Room With Walls or the Wren House 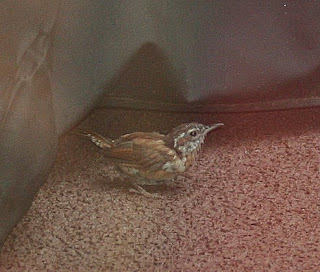 Due to the cooler evenings and my craving for a substantial dinner, I decided to roast a 4 pound chicken for our meal two nights ago. I marinated the fat bird in the early afternoon and started to preheat the oven. I stuffed the bird with onions and sliced apples and it took several hours to roast making the kitchen cozy and warm. Adding some cheese potatoes and a nice salad made the meal complete. When all was ready, hubby and I sat down to a perfect late October dinner. We threw our healthy caution to the wind and proceeded to stuff our little stomachs to the brim. With my last swallow of wine, I pushed myself back from the table and wondered if I would regret my piggyness.

Hubby graciously offered to clean up after dinner and I slowly burped my way upstairs to read some blogs. I heard him banging the roasting pan lid trying to get it clean. He called up to me asking what he should do with the drippings at the bottom of the pan. I did not want all that tempting but unhealthy fatty salty broth sitting around and suggested he may want to dump it in the woods outside.

I heard him open the front door and then I heard him bang the pan on the stoop and I heard a whuffet sound and my husband swearing softly under his breath.

When I called down asking about the commotion, he said that the new porch resident, a wren, flew into his face. We have a little wren that has tried to set up tenancy in my autumn door decoration and with the addition of the bug-filled split wood for the fire now added to the porch, she has a grocery store just beneath her new home.

I could hear the door was still open.

"I am afraid she did." hubby sighed.

Well the next hour (or what seemed like an hour) of our leisure evening with stomachs full of food was spent trying to encourage a small wren to leave the house. We closed all the doors and cupboards and turned off the ceiling fans. I had to get out the very, very long light-bulb changing pole to make her leave her perch on the chains of our hanging foyer lights in the second story. Hubby almost destroyed the geranium I had recently brought inside and placed on a corner near the window as she tried to hide behind that plant several times.

After depositing bird doo on various walls, she eventually tucked in behind some decorative basket ware that we have on the shelf above the foyer. Hubby was determined to get out and balance on that shelf and try to catch her, but I was adamant that I was not willing to add a visit to the emergency room to this evening's adventures and insisted that we try alternatives.

We don't have a butterfly net, but in desperation, got out the fish net to see if we could capture her. Of course, the weave is too big and although we swooped it over her several times, she acrobatically made it through the holes. Once hubby and I almost bumped heads as we dived for her, temporarily caught beneath the net on the kitchen floor.

Eventually she became tired and we were able to catch her in our hands. We very gently and carefully took her out the front door where she instantly dive bombed into the shelter of the wood on the porch. I sw her hopping around the porch today, appearing none the worse for wear, but chiding me in her whistling fashion. (The photo above is of another wren, perhaps a juvenile relative, that was on our deck this summer.)
Posted by Tabor on Monday, October 27, 2008