What Do Dreams Mean?

Today was my first day in some days without errands to run, speeches to give, meetings to attend, and other peoples projects to maintain.  I slept in until about 8:00 which is hours late for me.  I got into my sweat pants and top, glad to see it was a cool, gray rainy day outside alleviating any guilt that I might have for not working in the yard.  I had my coffee and half a blueberry muffin and read for a while.  The phone was reasonably quiet since the primary elections are over for our area.

When I did decide to move I finished the last of two loads of laundry that I had started two days earlier while I watched CNN.  I refused to be embarrassed by what our politicians are saying in the primary finale but when I saw the news that Hastert, former GOP Speaker of the House and one of the leads on criticizing Clinton for his Lewinski affair, had been convicted of a decades old case of pedophilia with wrestlers on a team he coached and using money fraud to try to cover it up, I had had enough duplicity! (Tom Delay asking us to go easy on this poor fragile old man, said more about Delay than loyalty to a friend.  I wonder if Hastert had approached Delay's daughter would he still be so forgiving?)

I turned off the TV, worked on my emails, had fun with photography "painting" for an hour and then returned to my book reading after putting some Yoga music on the CD player.  I ate some cold chicken and a bit of fruit salad for lunch.  Even though I had had at least 8 hours of sleep I began to grow sleepy in the early afternoon and went to the bedroom and collapsed on the bed.

I was in the deepest sleep very shortly.  I kept fighting to try and waken and could not.  I was dreaming that I was in a house somewhere and a lovely young boy maybe 6 or so was outside playing.  He was my son or grandson, I could not get my mind around it, except that this angelic child with a lovely laugh was having so much fun on a sunny spring day and I could hear him through the open window.  I knew in my heart of hearts that I was missing out on this precious time, but try as I might I could not open my eyes or lift my head from the pillow.  I could not wake up!  Later when I finally pulled myself out of the stupor I realized that I had slept for over an hour!

I am not sure what the dream meant, but I do know I must have needed that sleep.

Now as a thank you for your interest, I will provide a photo-painting that I worked on using filters, highlights and shadows, hue adjustment and even painting some colors with the mouse during this gray day. 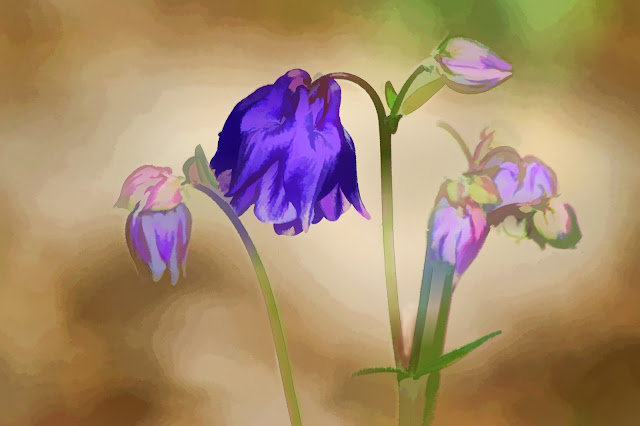