Have you ever paid for love?  I think that is what I was doing last night but not consciously.  Really.  I invited my daughter out with her husband for dinner in honor of her 39th birthday.  There is no way I am celebrating her 40th!  I said I would pay for the babysitter and dinner.  (Did you know babysitters get $17.00 an hour where she lives?)  I told her to pick the restaurant (the more expensive was already booked, thank goodness) and she wanted very much to try some new one that had just opened in March on the Harbor in Georgetown in Washington, D.C.  We invited my son and his wife to join us in this birthday celebration of their sister/sister-in-law.

The pre-dinner special cocktails were grand - mine was Stella Credente (rum and lime juice).  The appetizers were marvelous and exotic - mine was blue runner jack sashimi with fried sea beans. The salads we did not try to save room for entrees.  The entrees were small and sophisticated - mine was a half order of smoked potato gnocchi followed by olive poached halibut.  All were delicious and different.  The desserts were good and even some were great.

This restaurant sits on Washington Harbor and as a good omen, the heavy rain stopped and the sun broke out just as we got there!  We stayed for about an hour and a half and did not leave until dark.  We laughed, told jokes on each other, shared memories of recent trips, bragged and complained about the grandchildren, and in general, had a MAHVELOUS evening.

I could look around the spacious dining room and the main crowd did not even start showing up until 8:00 P.M.  The customers were so high-end that even hubby, who has not a clue about fashion, mentioned to son-in-law, "Did you see those guys in the power suits at that long table?"  (My daughter wore dress jeans, so you realize nothing is formal anymore.)

The Chef's wife who is the "Director of Customer Relations," stopped by to see if we enjoyed our meal, which we most certainly did, and joked with us and talked about her Italian husband.  They also own another high end restaurant in the city. 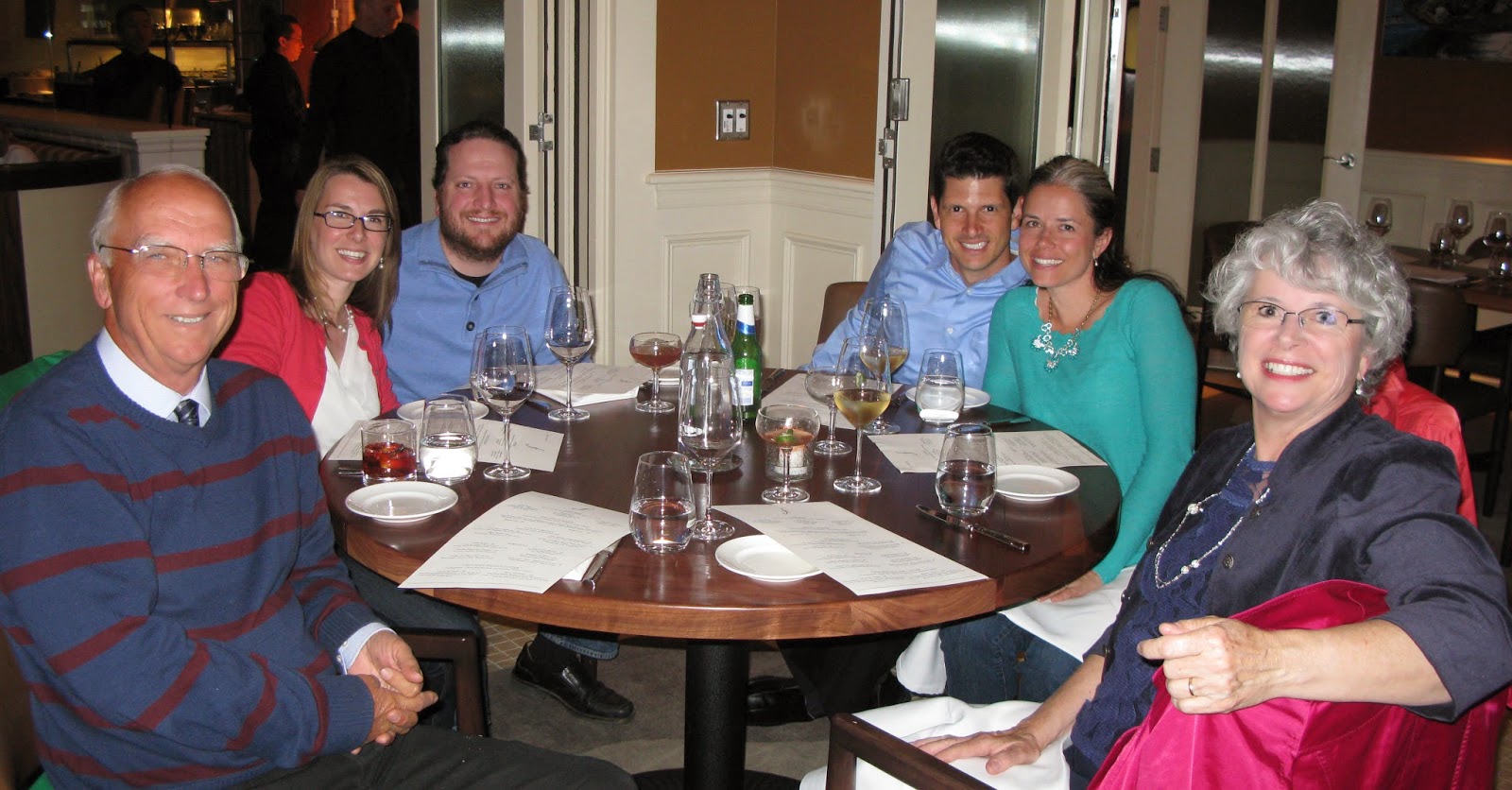 I sprung for the 6 dinners, drinks and asked S.I.L and son to pick up the tip. Perhaps, most of you would find the amount of the bill a jaw-dropping shocking amount, as did I,  and a few others of you would be pretty passive about such figures if you are in a higher income bracket, but I really wanted to treat them all and I cannot take money with me into the next life.  I do not think I have ever spent this much money for a night out!  And the wine was not $100 a bottle! Young folks as my daughter who take clients to dinner, do not think twice about spending money like this on a dinner, but we are on a fixed income and not that cavalier on a monthly basis.

Maybe I was buying love, but I felt I was throwing a party!  You can't take it with you and there is always the chance that someone will take it away from us in future years the way this world is going.  Anyway, if you are ever in town, get someone to take you there and pick up the tab!
Posted by Tabor on Sunday, April 27, 2014