Two Personalities in the Marriage 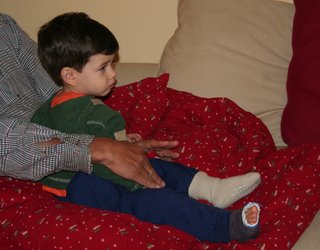 Just a little grumpy. He is such a drama king, though.

I spent part of the weekend taking care of Xman who is not a happy camper since he cannot get around easily. He is slowly getting the courage to stand, but has to be distracted by something. Needless to say, he is getting tons of attention from everyone and has his own little party going on where he is the center. He is a flirt and loves to pretend he doesn't care that we are totally interested in him. We talked about how hard that will be for him, when in the future, he is treated like a normal child after the cast comes off and people tend to ignore him much of the time.

I am continuing to have issues at work as are several of my other colleagues with the same problem. I still haven't decided whether to just keep a low profile the next two years and do standard work, or try to venture out and be creative with projects and ideas even though there is a chance certain entities will fight me on anything they think will take the focus away from them. It is really hard for me not to be working hard on something. (My supervisor is being very understanding...whether she will do anything is another matter, of course.)

I was down at the house on Sunday bringing some end tables and lamps from the apartment. Hubby cleaned out the gutters which were full of leaves while I did three loads of laundry and went through several weeks of mail...mostly junk mail. 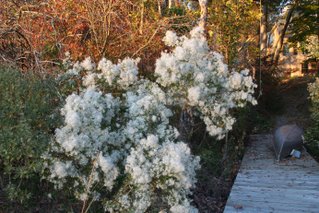 The bush by the dock has turned to snow.
Since we didn't get down there until almost noon the day flew by. The sun was setting as I was trying to sort some groceries for the freezer when Hubby came running in and said I had to get out to the dock and see the sunset. I was totally focused on a bunch of other stuff, but reluctantly relented. I took some photos and did some breathing in and out. I must have done something right to get this guy to marry me! He is so good about tapping into my zen moments when I am too busy being anal retentive and missing so much. 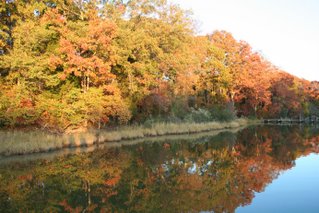 Dad was released from the hospital yesterday...things are looking up. I am smiling through the tears.